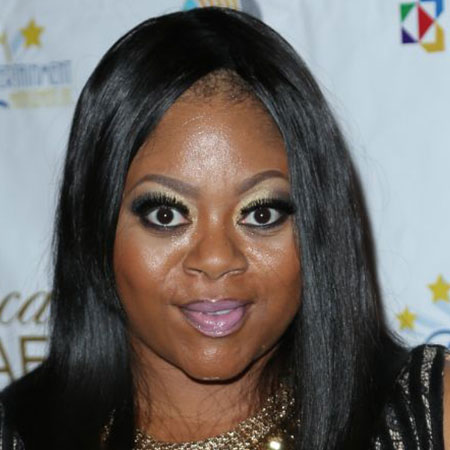 Countess Vaughn is an American actress, singer, and television personality who is best known for her role in the UPN sitcoms Moesha and its subsequent spin-off The Parkers. Not limited to TV realm, she is also a well-known singer who became famous after covering James Brown’s It's A Man's, Man's, Man's World and has released a self-titled studio album, Countess.

Countess Vaughn was born Countess Danielle Vaughn on August 8, 1978, in Idabel, Oklahoma, the United States under the star sign Leo. She was born to father Leo Vaughn and mother Sandra Vaughn. She belongs to African-American ethnicity and is an American by nationality.

She showed an interest in singing from an early age and started singing at the age of 3 at local churches. She participated and won the competition Star Search at the age of nine after which she was cast in the NBC sitcom 227.

After getting initial success in her childhood, she started her professional career in 1988 by playing the role of Alexandria DeWitt in 227. Then she starred as a guest in the shows like Thea, Hangin' with Mr. Cooper, and Roc. Her breakthrough role came in 1996 when she played Kimberly Ann in the UPN sitcom Moesha.

She also appeared on a TV show called Hollywood Divas and the following clip is from the set of her show.

For her performance in Moesha, she won the NAACP Image Award for Outstanding Supporting Actress in a Comedy Series in 1998.

Some of her most notable roles include Fievel's American Tails in 1992, Minor Adjustments in 1996 and More to Love in 2014. She produced and acted in the series The White Sistas in 2015.

The actress, comedian, singer, and TV personality Countess Vaughn ama s sed a net worth of $900 thousand. She started her career back in 1988 and has been contributing the field for over 30 years. Vaughn gathered this net worth by working extensively in show business.

Although there is no information about her earnings, the average actress earns around $52,000 a year. Similarly, singers earn around $45,000-$65,000 on a yearly basis.

Read More: English Actor Andrew Lincoln's Earning From His Profession and Net Worth He Has Managed

As per information from some tabloid sources, Vaughn is currently single and unmarried. Although she is not involved with anyone romantically, she was previously in a relationship with Joseph James.

The couple started dating in 2000 and got married on January 16, 2002. During their relationship, they were blessed with a son, Jaylen James. They were married for 3 years before getting divorced in 2005.

She remained single for a few years after her divorce before she started dating her boyfriend David Benjamin Richard in the late 2000s. Her relationship with Richard made headlines after she filed a case against her abusive boyfriend in August 2018.

In the legal battle that came before the ruling, she also claimed that Richard also threatened her with releasing her sex tape.

Meanwhile, in 2016, she made headlines after she dramatically lost weight. She hasn't revealed how much weight she lost but did a brief stint on MTV's Weight Loss.

You May Also Like:  Is Zayn Malik And His Girlfriend Gigi Hadid Engaged And Planning For Their Marriage?