Cody Ko is a Canadian YouTube star, comedian, podcaster, and rapper. He is best known for his short comedy skits on Vine. Likewise, he is also part of the comedy-rap duo Tiny Meat Gang with Noel Miller.

Cody Ko was born Cody Michael Kolodziejzyk on November 22, 1990, in Calgary, Alberta, Canada. Both of his parents, Helen Kolodziejzyk and Greg Kolodziejzyk were entrepreneurs who sold their software businesses. He also has a sister, Krista.

Cody Ko began his journey as a YouTuber in 2014 uploading vlogs about his personal life. In his initial days, he posted videos like BEST FRIENDS Q&A -- CODY AND DEVON, Behind the scenes of camp unplug, I did cocaine with the pope, Getting drunk at vidcon, and Farting in a wetsuit.

The viewers really enjoyed his videos and he came to the limelight. Eventually, he came out with different stuff and shared videos titled DOING STANDUP COMEDY and SNAPCHAT SPECTACLES REVIEW on his channel. 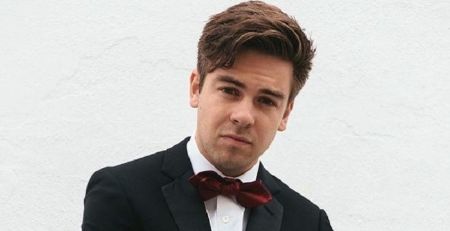 Additionally, Ko also started to post commentary videos on funny things on his Instagram. Some of his most videos liked by his audience are: Instagram comedians, Esteban is the worst thing to happen to Instagram, and Weird Instagram Comments w/ Corinna Kopf.

Furthermore, the YouTube star got motivated and started posting more humorous content on his social media. Some of his most loved videos on the internet are: WEIRD INSTAGRAM COMMENTS: Emily Ratajkowski (emrata), Dogs on Instagram,THAT'S CRINGE: Valentine's Day Edition, Making fun of your art, and others.

Did You Know: Cody was 20 years old when he designed an app called, I'd Cap That'.

The rapper is a part of the comedy-rap duo Tiny Meat Gang with Miller. Along with the group, he has contributed to EPs, Bangers & Ass, and Locals Only. They also have songs such as Super Xan, Stay Safe, No Flex, Walk Man, Short Kings Anthem, Broke Bitch, and Club Poor.

Cuddle Bug singer Ko is also an actor. He debuted in the industry with the Vine series Camp Unplug in 16. In 2017, he played the main role of Teddy on the TV series The Boonies along with Emilio Garcia-Sanchez, Zoe Travis, and Justin Cone.

Later, 5 feet 9 inches tall star featured in the short movie Suki in 2019. Since, 2017, Cody is playing Wade Sanders in the YouTube series, The Real Bros of Simi Valley.

Net Worth And Social Media Earnings

The multi-talented Cody has an estimated net worth of $4 million as of 2020. As per the sources, he earns a salary of $700,000 with his brand endorsement deals, merchandise, and tours.

The social media sensation is also active on Facebook with 23,918 followers and on Twitter with 1.9 million followers. Similarly, he has 1.9 million followers on Instagram. According to the Influencer Marketing Hub, he receives around $3,790.5 to $6,317.5 per sponsor post with an engagement rate of 21.57%.

Who Is Cody Ko's Girlfriend?

The Canadian internet sensation is dating Kelsey Kreppel (alias Taco Tuesday Girl). His girlfriend is also a YouTuber. The couple seems so much in love with each other. The duo frequently collaborates with their videos.

Cody is not married yet but is in a very happy and successful relationship with Kelsey Kreppel (alias Taco Tuesday Girl). His girlfriend is also a YouTuber.

2. What does Cody ko do for a living?

Cody Ko is a Canadian YouTube star, comedian, podcaster, and rapper. He is best known for his short comedy skits on Vine.

3. How much is the net worth of Cody ko?

Cody has an estimated net worth of $4 million as of 2020. As per the sources, he earns a salary of $700,000 with his brand endorsement deals, merchandise, and tours.

Born Cody Michael Kolodziejzyk on November 22, 1990, in Calgary, Alberta, Canada to Helen Kolodziejzyk and Greg Kolodziejzyk, the Youtuber is at the age of 30 as of Jan 2021.