Clayne Crawford is an American actor active in the entertainment industry since his debut in the 1997 TV series, Buffy the Vampire Slayer. In 2001, he appeared in One Blood Planet, his first big-screen role. He is cast in popular TV series, Law & Order as Jeremy Parks and in NCIS: New Orleans as Cade LaSalle. Crawford appeared in the American action drama series Lethal Weapon as one of the leads, Martin Riggs. Crawford will not be cast in season 3 as reports say that his behavior on set spoiled the working environment.

He graduated from Hewitt-Trussville High School in Jefferson County, Alabama. In his school days, he was very interested in sports and played almost every sport. He was a member of the football and wrestling teams back then.

Crawford was also interested in acting and to pursue his dream and career as an actor he traveled to Los Angeles in 1996. To support his career he started working in construction to earn his expenses while appearing in some small theatres. In his early days, he is even said to have played basketball at UCLA but had to drop out because of a knee injury.

Crawford made his debut in the entertainment industry in 1997in a TV series, Buffy the Vampire Slayer as Rodney Munson. Before 2000 he was known as Joey but later changed it to Clayne, referring to his hometown Clay, Alabama and honoring his grandfather.

He even took professional acting classes from Josh Holloway and Matt Gerald at the Ardavany Approach to polish his acting skills. Afterward, he was cast in various movies, his first being One Blood Planet as Cady then did some popular movies like A Walk to Remember, Swimfan, The Great Raid, Wristcutters: A Love Story, and The Donner Party among others. In the movie A Walk to Remember, he was cast alongside Mandy Moore and Shane West. 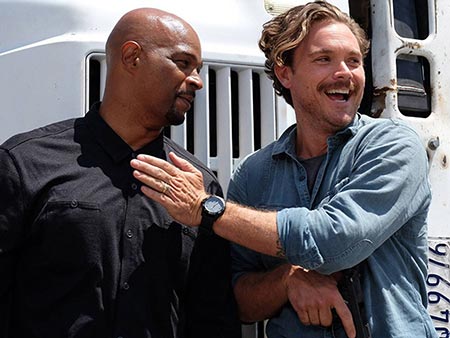 In the 2010s, Crawford was cast in many huge projects like TV series 24, Law and Order, CSI: NY, Memphis Beat, and Rogue.

He starred in the buddy cop action comedy-drama TV series called Lethal Weapon playing the role of Martin Riggs, a former LA police office of Narcotics department. He appeared in 40 episodes until he was taken off the series after his bad behavior on set. First, he got angry on the set claiming that the workplace was not safe. For his actions, he had to attend studio appointed therapy and also shared a good part of his paycheque with other party involved. The second incident that led to his firing occurred while he was directing an episode during which an actor said he felt unsafe after a shrapnel from the effect hit him. He later apologized for his actions saying,

"I absolutely love, respect and care for my crew and cast, and would never intentionally jeopardize so many jobs. I am incredibly sorry if my passion for doing good work has ever made anyone feel less than comfortable on our set, or feel less than celebrated for their efforts. Furthermore, I apologize to all the crew and cast for any negative attention Lethal Weapon is receiving because of these incidents."

In 2017, Crawford appeared in a movie called Tinker whose shoot was done at his hometown Alabama. His son Colton and his home were featured in the movie.

Clayne Crawford is estimated to have a net worth of $4 million. He earned million dollar fortune by being cast in various movies and Television series playing great roles.

His movie Spectral earned around $70 million in the box office and his other movies The Perfect Host and Wristcutter: A love story earned $48,764 and $454,026 respectively. Crawford also appeared in the hit 2002 American romantic drama film  A Walk to Remember as Dean which gathered a whopping $47.5 million out of $11.8  million budget. He has a house in his hometown Clay, Alabama where he stays with his family. Crawford owns a huge farm in his hometown.

Clayne Crawford was in a relationship with actress Sunny Mabrey and even got engaged in 2002. But, later he married designer  Sunshine Kiki Brown in 2004 and is together till present. They together have two boys Joey Crawford and Colton Crawford. He is also the stepfather of Sunshine's daughter Abby Brown from her previous relationship. Altogether he is a father of three.