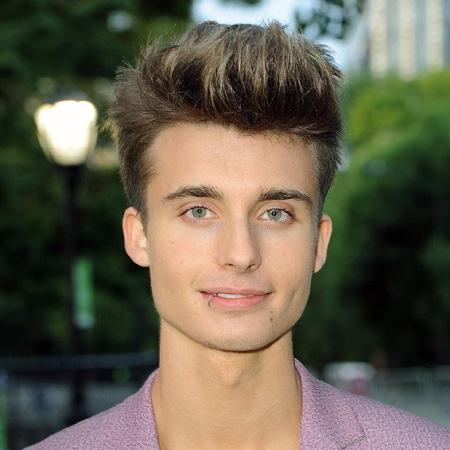 Christian Collins is a social media celebrity and a versatile entertainer. He is known as a WeeklyChris on  YouTube. He has worked as a musician, actor, and businessman as well. He is best known for his work on Implanted, The Razzle and I Am the Bluebird.

Collins who was born on 18th April 1996, in Canada. He holds a Canadian nationality and belongs to the White ethnicity. His parents were John Collins and Stacey Collins. He has a close relationship with his family and loves spending time with them.

Collins is the second son among the four children and was fully supported by his family. He was raised along with his siblings, Kristen Collins, Karisma Collins and Crawford Collins in Canada.

Collins attended the Bearspaw Christian School, where he completed his graduation.

Collins was interested in the field of acting so he pursued his career in acting. As he a youth, he was involved in creating videos on YouTube. He was fully supported by his parents. He has millions of followers on his Vine account.

Collins has millions of subscribers on his YouTube channel. He is popular on several social networking sites such as Instagram, Snapchat, and Twitter. He earned popularity from his YouTube channel, WeeklyChris. during 2010. He was just eleven years old when he started filming videos.

Previously, Collins was involved in marketing and content creation, which helped him to earn millions of subscribers. Alongside his sister Kristen Collins, he released singles, One and Don’t Let Go.

Collins came into limelight after the video was successful. He collaborated with several brands including Sour Patch Kids and received a commercial success. He frequently makes videos where he featured famous singers songs including Chris Brown titled Show Me.

Collins,21, is not married yet. He is a private kind of person. He is quite reserved in sharing his personal details to the outer world. He has dated beautiful Courtney Saints. The couple has shared various photos together on their Instagram account.

Collins is seen with few girls on his social accounts but has yet confirmed about his relationship status. He has not mentioned about his past affairs or having a girlfriend in his life.

Collins is a rapper, singer, drummer, and beatboxer as well. In May 2015, his lips were pierced, he showed a video of it on his Snapchat Account.

As the proficient star, Collins makes his money through different social media and music sales. His earnings and lifestyles show his net worth close to millions.