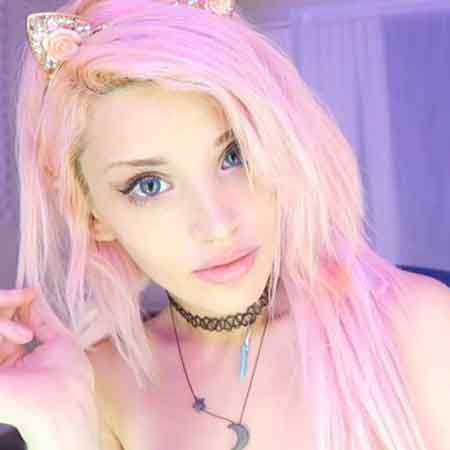 Cherry Crush is an American social media personality, adult movie star, and content creator who is known for her Youtube channel ASMR Cherry Crush which has over 470k subscribers as of 2018. She also has a self-titled vlogging channel. She created both of her channels in March of 2012. She lives with the motto, "No person has the right to rain on your dreams".

Cherry Crush was born on 9 July 1990 in the United States of America under the birth sign Cancer. Her real name is not disclosed yet to the public. Her father is originally from England and her mother is from America.

As she has not disclosed anything about her parents nothing much is known about them. She used to reside with her English aunt and had always loved making videos from an early age.

Regarding her education, Crush was homeschooled until 12th grade. She only attended a regular school when she was in 9th grade for just one week.

After completing her education, Crush decided to work in the beauty industry, however, it did not work out for her so she started attempting other career opportunities.

She then started her YouTube career by creating her own channel and posting various vlog content on her website. Crush also did question and answer videos, makeup and beauty tutorials as well as other content depending on her mood.

Both of her channels, ASMR Cherry Crush and Cherry Crush channels which were created on the same day in March of 2012 have amassed thousands of followers. Her former channel is mainly dedicated to ASMR. Meditation and Relaxation.

As per the different sources, Crush started as an adult movie star to earn a living and her father kicked her out of the house. However, after a year, her parents accepted her. She is featured in several adult movies since then.

Crush mostly earns money from her successful career on social media. From her ASMR Cherry Crush Youtube channel, her estimated monthly earning is ranges from $846-$13.5K, and her estimated earning per annum is between $10.2K-$162.5K.

Crush has kept her private life low-key. She has not disclosed her dating life and boyfriend to the media and public. She is possibly single as of 2018.

On Instagram, she mostly posts her pictures and her traveling stories. And regarding her Twitter account, it is listed as protected which looks to promote mainly her X-rated works.