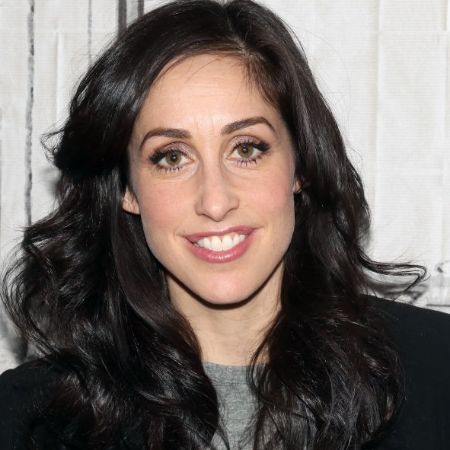 Catherine Reitman is an American-Canadian actress, producer, and writer. She is known widely for being a creator, executive producer, writer, and actress for the CBC television series Workin' Moms.

As an actress, her other recognizable works include The Ballad of Mary & Ernie, It's Always Sunny in Philadelphia, and Black-ish. Not only on TV, but she is also part of many box-office successful movies including Ghostbuster II, Kindergarten Cop, and I Love You, Man.

She is one of three children of actress Genevieve Robert and film director Ivan Reitman. She was raised along with her sister Caroline Reitman, and director brother Jason Reitman.

The actress went to Cate School and graduated from the University of Southern California with a degree in acting.

Started Her Acting Journey At The Age Of Seven

Catherine Reitman started her career as an actress in the feature film Twins in 1988. The following year, she appeared in the supernatural comedy film Ghostbuster II, in which Bill Murray, Sigourney Weaver, and Rick Moranis have the main role.

Later the actress appeared in many movies including Kindergarten Cop, Dave, Beethoven's 2nd, and Father's Day. She made her small screen debut in the television series Charmed in 2003. She appeared in many TV shows including Campus Ladies,  Hollywood Residential, and How I Met Your Mother.

In 2015 she appeared in Black-ish. The actress began her career as a creator, producer, writer, and director along with a starred role in the CBC television series Workin' Moms. She won Gracie Allen Awards for Outstanding Female Actor and Outstanding Director.  In the series, she worked along with Dani Kind, Juno Rinaldi, and Jessalyn Wanlim.

Catherine Reitman gained fame and fortune from her work. She has an estimated net worth of $1.3 million, as of 2022.

The Workin' Moms creator has not revealed any information about her salary and source of income. The average salary of an American actor and actress is around $50,000 per annum.

The actress and her husband paid $2.6 million for a house that they bought in Los Angeles.

Catherin Reitman is married and has two children. The couple dated Philip Sternberg for some time and this the knot in August 2009.

The 39-year-old actress is living a happy married life with Sternberg and two children.