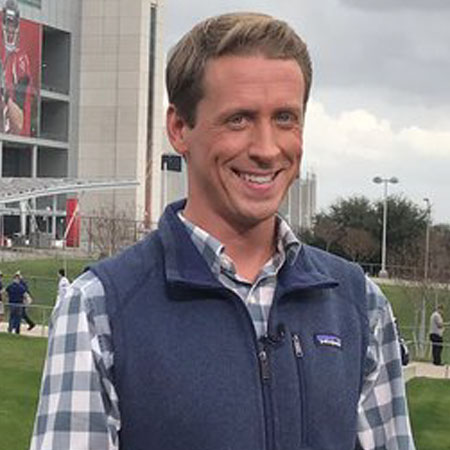 Casey Stegall well-known media personality and a television correspondent for the Fox News channel. Stegall is one of those reporters and television journalists who are also known for their pleasing appearance and unique presentation style.

Casey Stegall was born in 1979 in Evansville, Indiana in the United States of America. He is an American by nationality and belongs to white ethnicity.

Stegall got his education from Ball State University. He has a Bachelor of Arts degree with a telecommunication major with German as a minor. Stegall started his career in journalism as a reporter for the WTVW-TV; FOX 7 in Evansville, Indiana.

After Casey Stegall's first job as a reporter was at WTVW-TV; FOX 7, he worked for the Jerusalem Bureau of FOX News. His job was to cover the conflict issues between Israeli and Palestinian during his stay in Jerusalem. Apart from that he also covered the Israel and Syria conflict. In 2009, Stegall went to Afghanistan to cover live news related to the conflict in Afghanistan.

Stegall has covered war-related news from these dangerous places in life-threatening conditions. He also played a significant role in covering news related to the California wildfires as well as Hurricanes in New Orleans and Texas.

In his early years, Stegall has worked as a reporter at the ‘KVUE-TV’ based in Austin, Texas. Similarly, he handled responsibilities at the KDFW- TV as the general a s signment reporter and substitute anchor.

In 2013, Stegall covered the  Moore tornado news. He has also reported the death of singing sensation and pop star Michael Jackson. Casey Stegall was the man who featured a breaking news story in 2008 related to the Mumbai terrorist attacks.

Casey Stegall's net worth is $1 million, most likely or even more as he has worked on some life-threatening reporting projects and currently works for Fox News that is known to pay its reporters significantly higher than the average wage. As per some of the reliable sources he is supposed to make around $452,000 per annum as a salary.

Is Casey Stegall Involved In Any Kinds Of Relationship?

Casey Stegall, age 40, has not preferred to share about his personal life in public. If we go through the brief inspection of his social media platform we can see him with several ladies but none of them are mentioned as his partner. So without his word, we cannot disclose a single word in his personal life.