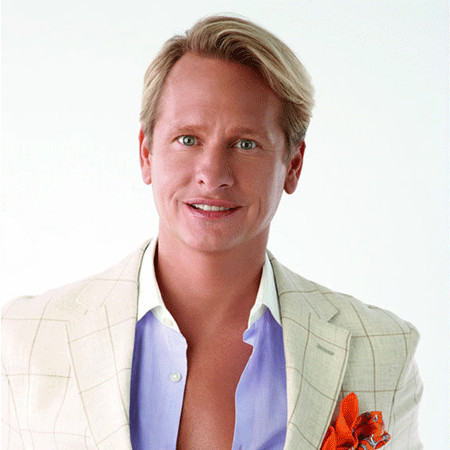 He is not only a sensational TV host but also a very successful fashion expert. His superb work ethics, undeniable charm, and stunning good looks seem to have paid off in terms of an enviable career and success. He is none other than the very talented and very interesting Carson Kressley.

Carson Lee Kressley is an American TV personality, actor, and designer who worked as the fashion expert on the American TV program Queer Eye. He was one of the show's "Fab Five". He was also the motivational host of the TV show, How to Look Good Naked and OWN's. He was a contestant on the 13th season of Dancing with the Stars.

Kressley was born in the year 1969 on the 11th of November and this makes his age 45 at this time. At this age, he has already reached the heights of success. His amazing presentation skills have won millions of hearts all over the world. And even after being so popular and so successful; he is still a very down-to-earth person.

He was born in a place called Lehigh County, which lies in Pennsylvania in the United States of America. He belongs to the ethnicity of white and nationality American.

Kressley went to Northwestern Lehigh High School for his early education. He then moved to Gettysburg College to do his graduation. From there, he received his degree in the field of fine arts and management.

Kressley started his career as a stylist and later on, he got an opportunity to work for Ralph Lauren which he did not let slip through his hands. He has since become a fashion expert for several TV shows. He has been known for his amazing work in TV shows such as 'Good Morning America' and 'How to Look Good Naked. However, his most popular show has to be Fab Five.

Happy Halloween from the Real Housewives of Disney! Can you find me ? Hint: I’m the pretty one.

He is also a sensational author and his work has done great business in the past. In the year 2004, he released and published a book called Off The Cuff: The essential style guide for men and the women who love them. The book did very well in the market and this made him publish other books as well. Other books he has published till today are You’re Different and That’s Super and Queer Eye for the Straight Guy.

Carson Kressley's net worth is $8 million at present. This proves how successful he has been in his career. He has won an Emmy Award for Outstanding Reality Program and is a gay rights advocate. Kressley is an ordained minister for the Universal Life Church and owns American Saddlebred horses.

He won a world title in 2009 as a horse show exhibitor. Kressley lost by one dollar in an episode of Celebrity Jeopardy.

He is a very tall man as he has a brilliant height of 5 feet 10 inches, which is around 1.78 meters. He is also very active on popular social networking sites such as Twitter. He has thousands of followers on Twitter.

Talking about his personal life, he is openly gay and this leaves the chances of him having a girlfriend or a wife to zero. It does not seem like he is married, meaning he does not have a husband right now.

He might be dating or have a boyfriend, but he has not revealed anything about his personal life. He does not have children nor has he been through the process of divorce until today.