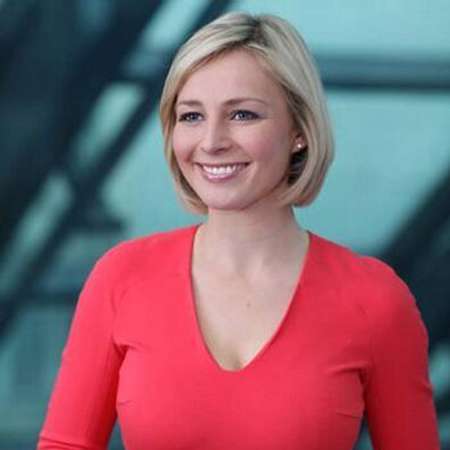 Caroline Hyde is a British journalist. She is a Berlin-based European business correspondent for Bloomberg Television. Currently, she anchors the channel’s primetime market-opening show ‘On The Move’ alongside Guy Johnson in London.

Hyde was born in 1984 in England. She is a British by nationality belonging to the White ethnicity.

Since 2008, she has been providing breaking news and analysis of the news driving markets and investment decisions in the show. She has also exclusively interviewed leading CEO’s, politicians and investors. Covering corporate business and markets is her specialty.

Hyde is a graduate of Oxford University, one of the top recognized universities based in Oxford, England, United Kingdom. She holds an MA (Oxon) in Politics, Philosophy and Economics.

Before college, she attended Woldingham School, graduating from there in 2002. Her interests also include sharing her opinions on restaurants and technological advances. She is also a fan of American rapper Jay-Z (Shawn Corey Carter).

She has also volunteered for various causes such as Civil Rights, Disaster and Humanitarian Relief, Economic Empowerment, Education, Human Rights, Politics and Science, and Technology.

Caroline always dreamt of being a news reporter. She grew up in a household that watched every single news bulletin throughout the day and was obsessed with news shows like the Today program, Channel 4 News, News at 10, etc.

After university, she wanted to travel India, so she got a temp job at a small, specialist financial PR company. Her boss taught her to write articles for trade magazines on behalf of her clients on varying topics like Structured Finance International, World Coal, Petroleum Review, etc. She loved to write, so she bid farewell to her India dreams.

After the financial crisis, she found herself writing about huge debt-laden deals day in, day out and her clients were sounding the alarm bells. She wanted to be closer to the action.

She started emailing a well-known print journalist who had just moved to the BBC and began sending him her thoughts, along with a CV asking for an opportunity for work experience in the BBC. She applied for an internship at the BBC Business & Economics unit and got the position at the end of 2007.

Hyde then took her experience and applied for a journalism-related job at Bloomberg. She got the job after nine interviews and is still working for the same firm. Caroline is currently the anchor of Bloomberg’s show “On the Move”.

She also serves as a chief European correspondent, traveling the region to report on the most important business, economic and political issues shaping global markets across the region.

Prior to joining Bloomberg, Hyde worked in public relations for London's Moorgate Group, where she was a debt market specialist, managing campaigns for clients including Standard & Poor's and Lloyds Banking Group.

Personal information about Hyde is almost non-existent in the media. She seldom shares her private information like marriage, husband, children, et cetera with the public. Some resources, however, hints that she is or has been engaged.

However, her marital status is still a mystery to most people. Her net worth is also undisclosed.