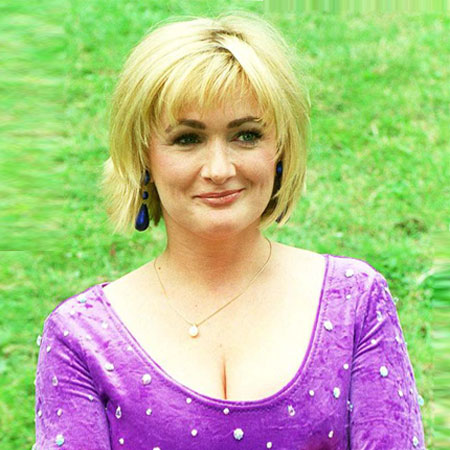 English comedian and BAFTA-winning writer and actress, born Caroline Mary Aherne was best known for her award-winning creation Mrs. Merton, The Fast Show, and The Royle Family. Not only that, but she was also known to have priory suffered from depression, alcoholism, and constant smoking and majorly, bladder cancer and a rare cancer of the retina.

Born on 24 December 1963 in Ealing, London into a family of an Irish railway laborer and a school dinner lady, Aherne like her brother suffered from retinoblastoma, a rare type of cancer in the retina which left her partially sighted in an eye.

Even as a young girl, Aherne had an uncanny gift for mimicry which eventually won her a prize at Butlins. She studied drama at Liverpool Polytechnic.

Caroline Aherne started performing on the Manchester comedy circuit as Mitzi Goldberg, lead singer of the comedy country and the western act The Mitzi Goldberg Experience long before she developed her famous agony Aunt Mrs. Merton character with Frank Sidebottom for his show on Piccadilly Radio where she actually worked as a receptionist.

Aherne made her first TV appearance on the Granda TV discussion show Upfront in 1990 as Mrs. Merton. She also worked as a BBC secretary with ambitions of becoming a writer and program researcher.

Aherne briefly worked in The Smell of Reeves and Mortimer in 1993 in a Granda TV Pilot entitled The Dead Good Show then appeared and wrote for the BBC comedy series The Fast Show between 1994 and 1997.

Aherne at the same time rose to fame as the character Mrs. Merton on the mock talk show The Mrs. Merton Show in 1994. It was like Aherne was multitasking at the time because she was suffering from depression and alcoholism and was married to Peter Hook of New Order in 1994 which abruptly ended in 1997.

The Mrs. Merton Show that aired on BBC between 1995 and 1998 was an unqualified success and the characters popularity produced adverts for British Gas, a sequel sitcom Mrs. Merton and Malcolm in 1999 all of which landed to a BAFTA in 1995. The year 1998 was very harsh for her,

While still playing Mrs. Merton, Aherne contributed a lot of characters to the award-winning sketch series The Fast Show on BBC from 1994 to 2000.

Aherne worked with Craig Cash on another sitcom but pulled out of the work Early Doors and later she and Cash developed a script for a one-off special of The Royle Family, the episode entitled The Royle Family: The Queen of Sheba which was broadcasted on 29 October 2006 to an audience of 7.8 million.

In the same year in December, she co-wrote the ITV comedy drama The Fattest Man in Britain. Not long after in November 2010 Aherne made an appearance in yet another The Royle Family special: Behind the Sofa shown on Gold, which featured clips of The Royle Family and interviews with Aherne, Cash and the cast followed by another Christmas special Joe’s Cracker.

Not much was seen her after that, Aherne narrated a BBC1 documentary entitled, Pound Shop Wars in November 2012. Later in 2013, Aherne wrote a one-off sitcom The Security Men for ITV. Since the year she has narrated the Channel 4 program Gogglebox.

Caroline Aherne's Net Worth And Salary

Caroline Aherne had a net worth in millions in her life. She has earned a decent amount of salary in her life.

Aherne till date has no children and is reported saying that she does not intend to get pregnant any time sooner or later because she fears about her heredity retina cancer happening to her offspring as well. Recently in 2014, she went on board on a program of treatment for Lung Cancer.

Aherne attempted a suicide when informed about her former boyfriend’s death. Aherne was admitted into the Priory clinic to treat difficulties with alcohol. Aherne’s list of romantic relations also includes that with comedian David Williams which was kept a secret because she wouldn’t let his career get damaged for being related to her.

Aherne was married to Peter Hook of the bands Joy Division and New Order from 1994 until 1997. During their marriage, he appeared in her TV series The Mrs. Merton Show as leader of Hooky & the Boys, the show's house band. After Aherne's death Hook described how she had been physically abusive towards him during their marriage.