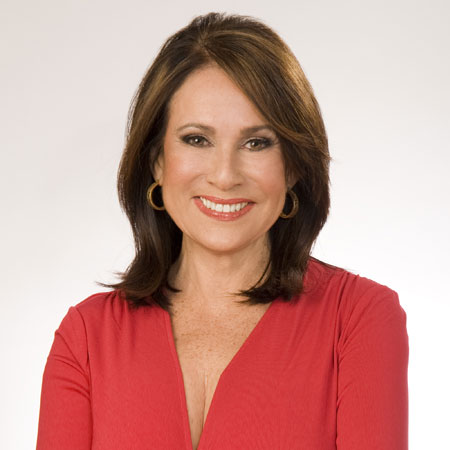 Silva was born and raised in Hicksville, U.S.A along with her two siblings. She is of American nationality while her ethnicity is Mexican-American.

It’s my #birthday. And this was my first posse! My first #bffs. My brothers! I’m on the right, but really the healthy #MiddleChild! I love my birthday because I love my life! #gladtobealive #brothers #familyfirst #celebrate

She is a graduate of Holy Trinity High School. She then attended Nassau Community College. Silva even joined the University of Dayton and New York Institue of Technology for her higher education.

During her college time, Silva was pulled back to New York when she was invited for her first job at WBAB in Babylon. Later she got graduated from the New York Institute of technology.

Silva has anchored for a very long time in newsrooms at WGBB in Merrick, WGSM in Huntington, WLIR in Hempstead and also in New York at WOR, WKTU  Radio, WNBC, the RKO Radio Network, and WNET-PBS Television in her early days.

Silva's career began during her college time when she started anchoring in news channels and radio. Later, she joined News 12 Long Island where she worked as a field reporter for the first four months.

After working for about a week as a field reporter for News 12 Long Island, Silva started working as an anchor and since then she has been working for the same post.

She has also been titled as a "Women Of Distinction" by the New York Senate, moreover, Silva named as "The Top 50 Women on Long Island" and was respected by The Long Island Congressional Delegation.

Additionally, Carol Silva has also been named as the member of the year award from the Long Island and was awarded as Long Island Hispanic of the year by Suffolk County Police Department.

Celebrated 28th Marriage Anniversary As Of 2019

Carol Silva is married and it has been a long time since they've got married. As per the post of Carol On September 14, 2019, the couple shared the wedding vows on September 14, 1991. They have already celebrated 28 years of togetherness and still going romantic together.

The couple has two children together; a daughter and a son. Her daughter is 25 years old and her son is 23 years old.

She was very active as a mother to her children in their early days but have grown quite well now. She was a football coach for her son and Girl's Scout leader for her daughter.

Carol Silva earns a huge amount of salary from News 12 Long Island and other organizations too, as she has also been awarded a lot of times for her hard work.

By considering her career and income source we can surely assume that she has a huge amount of net worth. Currently, Silva lives in a big mansion in New York with her family having a prosperous life.

Silva is very concerned about music. She loves blues music and is a huge fan of Eric Clapton.