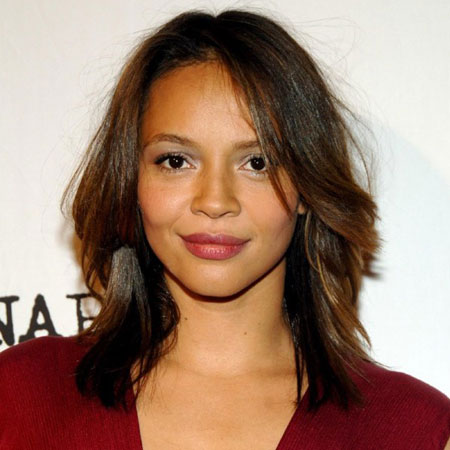 Carmen Ejogo is a British actress as well as a singer. She is mainly popular for portraying the role of Amber Belhaven in the 2001 American comedy film, What's the Worst That Could Happen?.

Ejogo was nominated for Canadian Screen Awards for her Performance by an Actress in a Leading Role in 2017. She was also nominated for Independent Spirit Awards for Best Supporting Female in 2015.

Carmen Ejogo was born as Carmen Elizabeth Ejogo on 22nd October 1973 in Kensington, London, England. She belongs to white ethnicity and holds a British nationality. Ejogo is British and is of Nigerian and Scottish descent.

Ejogo is born to a Scottish mother, Elizabeth Ejogo and a Nigerian father, Charles Ejogo. Her father died in a car crash when she was young. During her childhood, she remembers her mother as being "a bit of a hippie".

Ejogo has a younger brother, British Entrepreneur, Charles Ejogo who is the inventor of the Umbrolly umbrella vending machine.

Ejogo was also raised in Chelsea where she went to Oratory Primary Roman Catholic primary school till 1984 and then she got enrolled at Godolphin as well as Latymer School.

Carmen Rjogo began her career as a television artist in early 1990’s after she presented Saturday Disney, a children series in the UK. She has also played in several movies. Her movie credits include 'Metro' with Eddie Murphy, Love's Labour's Lost with Kenneth Branagh and some others.

She presented her own short movie 'The Carmen Ejogo Video Show' on BSB's Power Station channel.

Carmen has also worked in the music industry since 1990. She has worked in collaboration with several music artists and was the writer and lead singer of the song Candles. She also has duet song  'Slowly' with her former husband Tricky. Moreover, she was the vocalist for the songs in the 2000 movie Love’s Labour’s Lost.

Prior to slowly, Carmen has made her appearance in four more songs by Sparkle.

The Saturday Disney morning show host Carmen Ejogo is a divorced woman. Previously, she was married to Jeffrey Wright in August 2000. Her ex-husband Wright is an American film and television actress.

Ejogo and Wright met each other on the set of HBO film Boycott. They have two children together with a son named Elijah and a daughter name Juno. The duo got divorced after 14 years of marriage in 2014

Besides, Carmen was briefly married to Tricky in 1998. Tricky is an American record producer and musician. The two met during the stage performance and later got married during the musical tour in Las Vegas.

She is currently a single mother raising her two children.

As an actress, Carmen Ejogo has earned a good amount of salary from her career. After featuring in several popular movies and television series her estimated net worth is around $3 million.