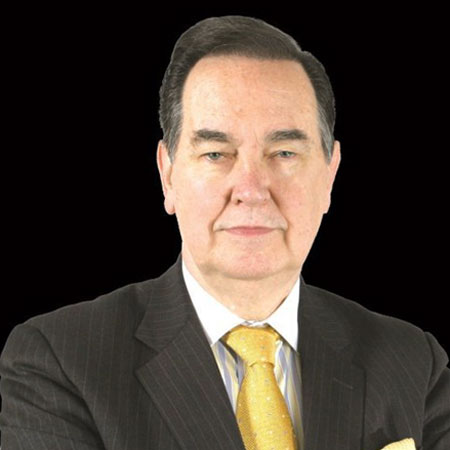 Cal Thomas is an American Political Commentator, Radio commentator, an author, and a Columnist. Thomas has authored more than ten books including, "Common Ground: How to Stop the Partisan War That Is Destroying America" co-authored with Bob Beckel. Thomas has also won Cable Ace Award for Best Interview Program in CNBC.

Cal Thomas was born as John Calvin in the year 1942 on December 2 in Washington, D.C., United States of America. He belongs to white ethnicity and holds an American nationality.

Thomas had a younger brother Marshall Stephen Thomas born on 1950 who worked a part-time job in the day program at CHI Centers in Silver Spring from 1980 to late 1990.

Thomas completed his education from the University of America.

Cal Thomas began his career working as a reporter for NBC News in 1960 and stayed with the network till 1970.  He became a Tribune Media Services syndicated columnist in 1984.

Thomas joined Fox News in 1997 as a political contributor. He was a panel member of the Fox News Watch,   a show on  Fox News which criticized the media.

Thomas hosted the show for Fox News Channel  ‘After Hours with Cal Thomas’ until 2005. The same year, he also served as a commentator on a daily radio program heard on more than 300 stations.

Thomas has worked as a columnist for the USA today, an American daily Newspaper, from 2005 to late 2015 where he collaborated with Bob Beckel.

Apart from his journalism career, Cal Thomas is also known as an author. Some of his books are Blinded By Might (1999), The things that matter most (1994), What Works: Common Sense Solutions for a Stronger America (2014) among others.

Cal Thomas was married to Charlotte Ray Thomas. But unfortunately, his wife died in the year 2017, February 12. She expired at the age of 78 due to multiple health issues in Falls Church, Virginia.

They married fifty-one years ago in 1966. Thomas first met her at a musical theater. Cal Thomas' wife, Ray was a family therapist.

The couple has four children and eleven grandchildren together. Thomas and his well-grown children currently live in the Washington DC area.

Thomas even lost his brother Marshall S Thomas on January 5, 2012, at Holy Cross Hospital in Silver Spring. The reason behind his death was dementia and complications from Down syndrome.

Thomas earns an impressive amount from his career as Journalist and books royalty. His net worth is most likely over a million USD. However, exact figures aren't known.