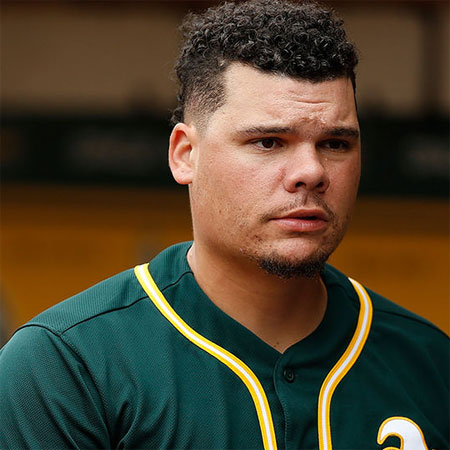 Maxwell was born on December 20, 1990, on a U.S. military installation in Wiesbaden, Germany. He is the son of Bruce Jr. He belongs to American nationality and regarding his ethnicity; he is an African-American.

Maxwell attended Sparkman High School in Alabama. There he played baseball for the first time. Following his high school, he joined Birmingham-Southern College in Alabama. At the time, he also played first base and catcher in college baseball at Division III.

Bruce Maxwell was selected by the Oakland Athletics in the second round of the 2012 Major League Baseball draft. He later played for the Vermont Lake Monsters in the Class A-Short New York-Pennsylvania League, in 2012. He was charged with 18 passed balls in 38 games.

Maxwell is currently playing for the Oakland Athletics of Major League Baseball. He was the only player in MLB to take a knee protesting racial injustice by kneeling during the national anthem on September 23, 2017.

Bruce Maxwell, 27, is unmarried and not dating anyone officially at present. Maxwell is a very secretive person as he has shared few thing regarding his affair, dating, and relationships in the media.

Maxwell was arrested on October 28, 2017. He was charged with a felony of aggravated assault with a deadly weapon at his home in Scottsdale. He reportedly pointed a fireman at a female food delivery driver.

Following the unfortunate incident, Maxwell signed bond worth $10K to travel to Texas for November and December’s holidays.

Bruce Maxwell is an American professional baseball catcher who has earned a considerable amount of money from his career. He stands an incredible height of 1.8 meters (6 feet 1 inch) and weighs 250 lbs (113 kg).

Maxwell earned an annual salary of $507,500 from his playing career as per his previous contract in 2016. He is currently playing as a catcher for the Oakland Athletics of Major League Baseball.

Maxwell signed a 1-year contract with the Oakland Athletics worth $535,000 that includes $535,000 guaranteed, and an annual salary of $535,000. He has not revealed the exact amount of his net worth but comparing to his income his net worth can be more than millions.