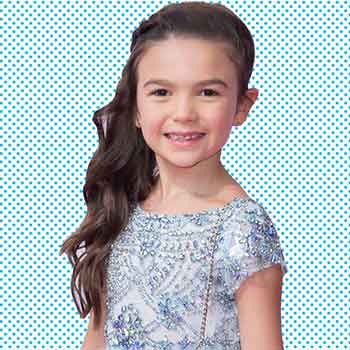 With millions of fans around the world, Brooklynn Prince is one of the popular actresses widely known after she landed in a 2017 movie The Florida Project. And her role in the movie also earned her numerous accolades which include Critics' Choice Movie Awards and Women Film Critics Circle.

Brooklynn Prince was born on 4 May 2010, in Florida, United States. Her mother started out as an agent but she later ended up being an acting coach of her. Her grandmother's name is Mimi.

Prince was homeschooled growing up in and initially started her career in the modeling.

Brooklynn Prince started her amateur career as a model at the very early age of two after appearing in print and screen advertisements for Parenting, Chuck E, Cheese's, and Visit Orlando. She made her silver screen debut playing the role of Mira Perry in the short movie Robo-Dog: Airborne in the year 2017.

Prince made her biggest breakthrough after her marvelous performance in the successful movie The Florida Project. In the movie, she shared the screen alongside Willem Dafoe and Bria Vinaite.  The following year featured in Monsters at Large. Her breakout role in the movie also earned her a number of accolades like Critics' Choice Movie Awards, Women Film Critics Circle, as well as Alliance of Women Film Journalists.

After that, she has made her appearance in the  The Angry Birds Movie 2 and The Lego Movie 2: The Second Part.

Prince's upcoming projects are The Turning, and The One and Only Man.  She is also supposed to appear in the Apple series Home Before Dark which is based on Hilde Lysiak life story.

Brooklynn Prince's Net Worth And Salary

A successful teen actress Brooklynn Prince's acting skills at such a tender age are truly amazing. And her iconic role in several projects also led her to earn a lot of fame as well as a good amount of money. The exact amount of her net worth is yet to be revealed but as per some online sources, her net worth is believed to be over $400K.

In the year 2017, Price was cast in the movie The Florida Project which grossed over $10 million on a $2 million budget. She is also cast member in the upcoming supernatural horror movie The Turning where her salary is $100K.

Brooklynn Prince is currently pretty focused on her professional career. She loves to spend her spare time with her parents.

Happy Father's Day to the best dad in the entire galaxy. Thank you for everything you do for me and the family and for the dance parties and for being the best prince in the whole world. I love you daddy, love bb8.

Prince is also popular on Instagram and has more than 140K followers on the photo and video-sharing site.  She loves playing video games, swimming, watching cartoons and spending time.