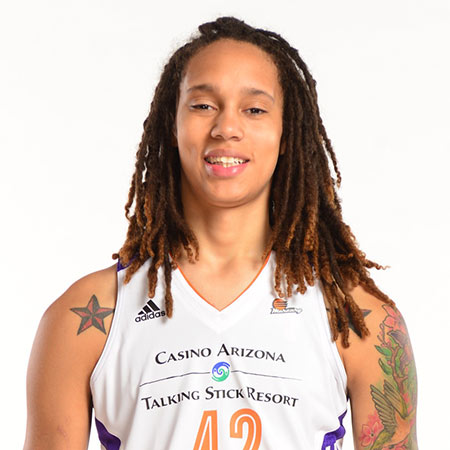 The 2012 Best Female Athlete ESPY Award-winner Brittney Yevette Griner is a professional basketball  center player of Women's National Basketball Association, personnel of Phoenix Mercury. At Baylor University, she played College Basketball in Waco, Texas.  She was named the AP Player of the Year in 2012, as well as the Most Outstanding Player of the Final Four. Griner is the youngest of four children to Raymond and Sandra Griner. She was born on October 18, 1990, in Houston, Texas, USA.

Griner was educated at Nimitz High School in Houston. During high schools, she played volleyball in varsity team. In her senior year, she played basketball in Texas 5A girls basketball state championship game, where she played 32 games and dunked 52 times, holding the record of seven dunks in a single match. She managed to record 25 blocks in one game with Houston Alief Hastings, which led her set the record in high school game in the US by a female. In 2009, she was named the WBCA All-America and played the game. She scored 20 points and collected 9 rebounds for the team.

Griner attended Baylor Universty in Waco, Texas and played the college basketball. During her freshman year, she was described as one of the greatest shot blockers in women's basketball history, after she blocked 223 shots. She set a record on NCCA tournament after she blocked 14 shots against Georgetown Hoyas on March 22, 2010.

Standing 6 feet 9 inches (2.06 m), Griner started a professional career in 2013 when she was picked by Phoenix Mercury during the WNBA Draft. She debuted a game on 27 May 2013, playing against Chicago Sky. Since then, she has been the cornerstone of Mercury on WNBA and won the 2014 WNBA Finals. In September 2011, during the European training tour, Griner played for the USA team for two weeks under the coach of Geno Auriemma. She managed to average 12.8 points and 7.3 rebounds in Europe.

Griner represented the United States in Olympic Games Rio 2016. She earned a number of honors. Rivals.com placed her as the number one high school player in the nation. In 2009, she was chosen the State Farm/WBCA High School Player of the Year and was featured on ESPN's Rise Magazine. In 2011, she won WBCA NCAA Division 1 Defensive Player of the Year. She is also the 2012 and 2013 winner of  WBCA NCAA Division 1 Defensive Player of the Year. In 2012, she was honored with Honda award and Honda-Broderick Cup winner of all sports. In 2013, Griner also won the ESPYAward for the best female college athlete. She also won the 2012 Ann Mayers Drysdale Award and again in 2013. Griner's dedication and successful career have earned her a net worth more than $2 million with $600,000 yearly salary. Her weight is 93 kilograms (207 lbs).

On April 17, 2013, Brittney Griner publicly announced that she is lesbian when she was interviewed by Sl.com. And she further added that she was often bullied during her childhood and said: "It's hard. Just being picked on for being different. Just being bigger, my sexuality, everything". On August 14, 2014, she announced that she is engaged to fellow WNBA player Glory Johnson and married on May 15, 2015, in Phoenix, Arizona. After a day, the couple announced that Johnson is pregnant, on June 5, 2015,  Griner filed a cancellation of the marriage citing duress and fraud as she has no biological connection to the baby. On April 22, 2015, they are arrested after the police caught the couple fighting in their home in Goodyear, Arizona. On May 15, 2015, the WNBA suspended Griner and Johnson for seven games and was ordered to attend the domestic violence counseling for 26 weeks.