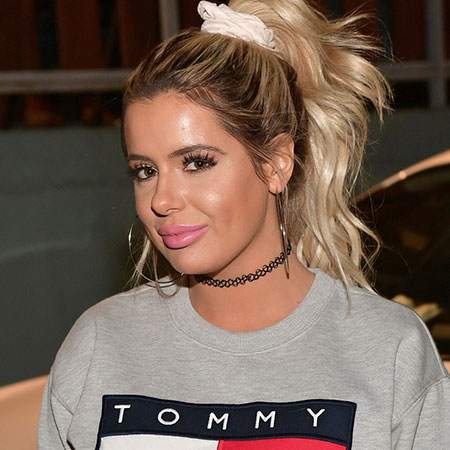 Brielle Biermann is a Reality Tv Star, became famous after appearing in the "Don't Be Tardy" and "The Real Housewives of Atlanta." She is also a model who has modeled at the Michael Kuluva show during New York Fashion Week. She is also famous as a step-daughter of Kroy Biermann, American football outside linebacker.

Brielle Biermann was born on February 25, 1997, in Atlanta, Georgia under the zodiac sign of Pisces. She holds an American nationality and her ethnicity is mixed. Her mother's name is Kim Zolciak who is also a TV star and her father is Dan Toce.

She is living with Kroy Biermann, her step-father. She has a little sister Ariana Biermann who was born on October 17, 2001. Ariana is not her only sibling, she has 4 maternal half-siblings Kaia Rose, Kane, Kash and Kroy Jr. Brielle. Brielle studied at the Roswell High School and Johns Creek High School.

Brielle Biermann started her career as a reality Tv star and as well as a model. She pursued her career in acting. She started working as a Don’t Be Tardy and later she worked alongside her mother Kim Zolciak in The Real Housewives of Atlanta. As a model, she walked at a Michael Kuluva show during New York Fashion Week in 2013.

Talking about her step-father, Kroy Biermann is a former American football outside linebacker. He started his career as an American football player from his school. He has played 52 games while totaling 220 tackles, 32 sacks (second-most in school history), 45 tackles for loss, 9 forced fumbles, 7 fumble recoveries for the University of Montana.

Kroy Biermann was named as the 2007 Big Sky Conference Defensive MVP after accumulating 70 tackles, 15 sacks, 18 tackles for a loss and 5 forced fumbles during his senior season. In 2007, he even became Montana's first-ever recipient of the Buck Buchanan Award.

Brielle Biermann net worth is still not revealed but as a TV personality and a model, she has earned a decent amount of money. For her appearance in the show Don't Be Tardy and The Real Housewives of Atlanta, she received about $10k for each episode in Don't Be Tardy.

According to the sources, she got total money of around $120k for her appearances in the television series. In her career, she also did modeling where she walked in the Michael Kuluva show during New York Fashion Week in 2013 from which we can speculate she earned a good sum of money.

feeling beyond blessed today!!! at 20 years old i was able to buy my DREAM car today a Mercedes G Wagon!!!i’m so lucky!! and so thankful!!! thank you mom & dad @kimzolciakbiermann & @kroybiermann for teaching me that you can have whatever you want in life!!

As per some source, Biermann owns a Mercedes G Wagon which cost about $123,600.

Talking about her mother, her net worth is estimated to be around $1.5 million which she earns being a reality television personality. Alongside her mother, her step-dad has a decent net worth of around $5.5million net worth.

Brielle Biermann is currently single, after being separated from her previous boyfriend Micheal Kopech who was a Boston Red Sox minor league pitcher. According to the source, the couple started dating in March 2016, however, they confirmed their relationship in June 2016.

In May 2017, they celebrated their one year anniversary sharing a photo of them on her Instagram with a caption "I couldn't love him more than she did right then. Before dating Micheal there was a rumor that she was dating Chase Chrisley, the son of Todd Chrisley in 2016. But the cute couple couldn't be together for long and they got separated in March 2018 after two years of relationship.

Brielle Biermann was speculated to have gone under the knives, however, she denied to going through plastic surgery. In the video shown below, Biermann opens up about the fact regarding her cosmetic surgery.