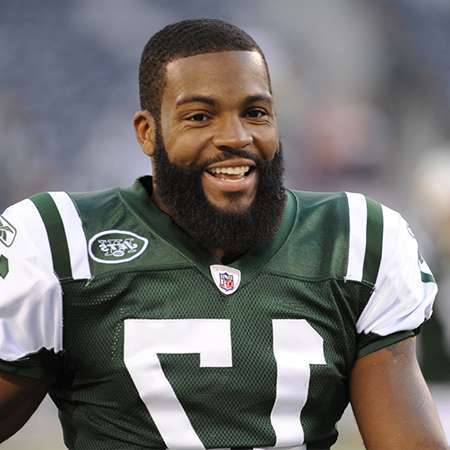 Braylon Edwards is a former professional football player who has played as a wide receiver in the National Football League (NFL).

Edwards was born on February 21, 1983, in Detroit, Michigan, U.S. He holds an American nationality belonging to the Afro-American ethnicity. He is the son of  Stan Edwards and Malesa Plater. He has a brother named Berkley Edwards.

Edwards belongs to the family from a sports background. His father, Stan Edwards is a former football running back whereas his brother, Berkley is also a football player.

Edwards attended the Bishop Gallagher High School. He played various positions for his high school football team during his three active years at the high school. He made 63 receptions, 740 yards, and eight touchdowns during that time.

Edwards moved to the University of Michigan, following his father’s footsteps. There he played for coach Lloyd Carr’s team, Michigan Wolverines from 2001 to 2004. He set Michigan season records for 97 receptions and 1,330 receiving yards, and career records for 252 receptions, 3,541 yards, and 39 touchdowns during his senior season in 2004.

On September 11, Edwards made his NFL debut against the Cincinnati Bengals and caught his first NFL touchdown at the Green Bay Packers on September 18. He signed a one-year contract worth $1 million with the San Francisco 49ers on August 4, 2011.

Edwards has reached the age of 34 now. He is not married yet but has two children. His birth sign is Pisces. He currently resides in Detroit, Michigan. He has earned more popularity from his playing career.

Edwards started dating Ashton Whittington, a fashion blogger, in mid-2010 and had an affair for several of years. They had a relationship for a long time, and she became pregnant around the time he was arrested in September 2010. She gave birth to their son, Ashton Arthur Whittington in 2011.

The couple is no longer in the relationship now. Ashton is taking him to family court in Manhattan after she gave birth to their son as reported by the New York Post. He knew about his son and is paying interim child support. But Ashton is still suing him for more formal child support agreement.

This was the second time for him in two years that he is being sued for child support after fathering another secret child with a different woman.

Nik Pace, a model, sued him in 2010 after having a child with him. The litigation was held in New York, and Pace successfully won the case. She was awarded less than her $70,000-a-month demand.

Edwards is currently in a relationship with his new girlfriend, Victoria Bow. He often tweets love messages for his new girlfriend. He has posted some pictures together with his girlfriend on his Instagram account. He might be thinking of making her future wife

Edwards promised to 100 Cleveland High School students that he would pay an offer valued at $1 million for their college tuition if they performed 15 hours of community service and maintained grade point averages at 2.5 or higher.

Edwards is active on social networking sites such as Twitter and Instagram. He has a huge number of fan followers on both of his accounts.