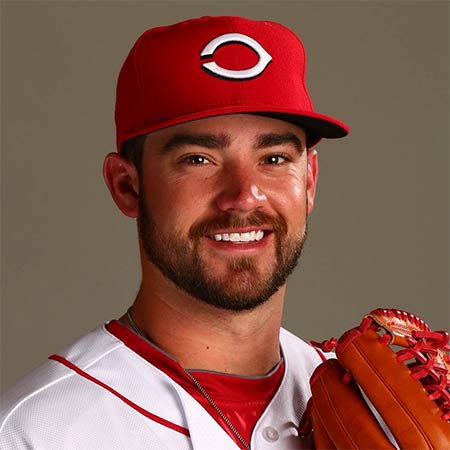 Brandon Finnegan is an American professional baseball pitcher for the Major League Baseball team, Cincinnati Reds. Similarly, he has also played for the Kansas City Royals.

Finnegan was considered a top prospect for the 2014 Major League Baseball Draft, which is why The Kansas City Royals selected him in the first round, 17th overall, of the draft. He signed with the team on June 28, 2014. Finnegan became the first player in the history to play in both the College World Series and MLB World Series in the same calendar year.

Talented Finnegan earned his first major league held on September 22 when he pitched a scoreless seventh inning against the Cleveland Indians. He made his MLB postseason debut in the American League Wild Card game vs. the Oakland Athletics on September 30, 2014.

In the second season game of the 2014 American League Division Series on October 3, 2014, Finnegan came in relief and picked up the 4-1 win, becoming the youngest relief pitcher in Royals postseason history to log a win.

On July 26, 2015, Brandon Finnegan, along with Cody Reed and John Lamb, was traded to the Cincinnati Reds for Johnny Cueto and cash considerations. He pitched for the Louisville Bats of the Cla s s AAA International League as a starting pitcher and was immediately promoted to the Reds on September 1 as a relief pitcher.

Even though he was traded from the 20155 World Series Champion Kansas City Royals, he was awarded the World Series ring for Finnegan’s contribution trade. Brandon began the 2016 season pitching out of the rotation for Cincinnati, opening as the team's second starter behind Raisel Iglesias.

The talented and handsome Finnegan is in a relationship with Carly Peters, a TCU cheerleader and sorority girl, who has watched her boyfriend go from college pitcher to pitching in the World Series, and that too only within a Four-month period. The couple looks really hot and adorable at the same time. This 21-year-old star is just living a wonderful life right now with his supportive partner.

Finnegan is currently at the height of his career, and as of 2016, his net worth is estimated at $2.2 Million dollars, while he earns a salary of $1 million.