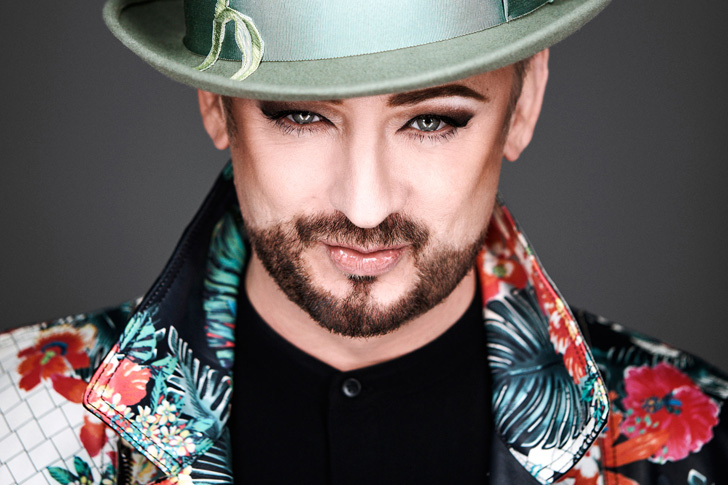 George Alan O'Dowd, popular as Boy George is an English singer-songwriter, DJ, fashion designer, and photographer. The Grammy-winning artist is popular for his multi-talented skills and stylish dress-up. He is a lead vocalist of the English pop band Culture Club.

He received an Ivor Novello Award in 2015, from the British Academy of Songwriters, Composers, and Authors for Outstanding Services to British Music.

Boy George was born George Alan O’Dowd on 14 June 1961, in Eltham, London, England. He is the son of Jeremiah and Dinah O’Dowd. His parents were Irish whereas he was a follower of the New Romantic movement which was popular in Britain in the early 80s.

He grew up with his five siblings; one sister Siobhan O'Dowd and four brothers; Gerald O'Dowd, David O'Dowd, Richard O'Dowd, and Kevin O'Dowd. He claims he had a lonely childhood referring to himself as the 'pink sheep' of the family.

George created his own image, which he came to depend on, to stand out in the male-dominated household.

He later reminisced and said, "It didn't bother me to walk down the street and to be stared at. I loved it."

It was hard to fit within traditional masculine stereotypes, as he was learning more towards arts rather than science and math.

With the suffering in school and an ongoing battle of wits between him and his teachers, it wasn't long before the school gave up and expelled George over his increasingly outlandish behavior and outrageous clothes and make-up.

George used to do any work he could find that paid him enough money to live on, as he was expelled from the school. He even worked as a make-up artist with the Royal Shakespeare Company. Working there, he picked up some handy techniques for his own personal use.

Occupationally, George has a variety of personalities being like a disc jockey, photographer as well as a fashion designer. He started his career with the band named Culture Club which is also the winner of the Grammy as well as the Brit Award. He is the lead singer of the band.

His androgynous style of dressing caught the attention of music entrepreneur Malcolm Mclaren (previously the manager of the Sex Pistols). He arranged for George to perform with the group Bow Wow Wow.

Following his leave from the group, he started his own band with ba s sist Mike Craig. The band was later joined by drummer John Moss and then guitarist Roy Hay.

The band named their group "Culture Club," as it consisted of a cross-dressing Irish singer (George), a black-Briton (Craig), a Jewish drummer (Moss), and an ethnic Englishman (Hay).

Within the 80s band Culture Club, he started his very first performances that started from 1981 to 1986. The band released their first album Kissing to Be Clever in 1982.

The album was a great hit and was ranked #5 in the U.K. and #14 in the U.S. The single from their debut album, Do You Really Want to Hurt Me? became an international hit in a dozen countries around the world.

Their second album, Colour By Numbers was an enormous success topping the U.K Charts and hit No.2 in the U.S. The single, Church of the Poison Mind became a Top 10 hit and Karma Chameleon became an international hit peaking #1 in 16 countries and Top 10 in additional countries.

In 1985, Geroge performed backing vocals to Fear Sharkey's #1  hit, A Good Heart. He also performed a cameo role in an episode titled, Cowboy George of an American adventure TV series, The A-Team.

Following his fourth album release, word shortly began circulating in tabloids that George was addicted to drugs. Also, he was arrested in Britain for possession of cannabis.

With George's drug addiction, the underwhelming performance of their last two albums, a soured romance between band members shrouded in secrecy, and a wrongful death lawsuit looming, the group ultimately disbanded.

The band reunited in 1998 and performed three dates in Monte Carlo. He then joined the Human League and Howard Jones in a Big Rewind tour of the U.S. The band also appeared on the Late Show with David Letterman and made the first appearance in Britain in 14 years.

George announced to BBC on January 21, 2011, that there would be a 30th-anniversary Culture Club reunion sometime later in the year. Though the 2011 tour never happened, the band did play two live concerts in Dubai and Sydney.

His solo career started in the year 1990 and he also presented the weekly chat within the channel called Blue Radio.

In 1992 and later on, he also established his own boutique and made dresses for the top fashion models as well as a diva and introduced himself as being a fashion designer.

He was one of the coaches alongside Seal, Kelly Rowland, and Delta Goodrem on the sixth season of the singing reality show, The Voice Australia.

Something for everyone. What a mixed bag this year! https://t.co/gXTa10fScu

The show was broadcasted on 24th April 2017 on Nine Network. The show was won by Australian singer, Judah Kelly, who was coached by Delta Goodrem during the season.

Boy George stands 6 feet tall. He loves music more than anything. He is an unmarried man and has no children.

Previously, he dated several popular divas which he mentioned in one of his interviews. There was speculation about his sexuality due to his androgynous appearance when he was with Culture Club.

In 1985, when asked about this sexuality, he said he was bisexual and had various girlfriends as well as boyfriends in the past.

He has talked about the first realization that he was gay, and when he first told his parents in a 2008 doc u mentary Living with Boy George. Also, he disclosed that he understands why men fall in love with one another as well as with women in the doc u mentary.

He also worked as a DJ in the early 1990s, and with developing a career as a DJ in the late 90s, he adopted a macrobiotic diet, which he had been attempting to follow since 1988. He published the book in 2001 the Karma Cookbook, co-written with Dragana Brown.

George had been struggling with he r o i n addiction for many years, by the 80s. Kirk Brandon, an English musician, sued George for libel claiming that he and George were in a romantic relationship, which George mentioned in his autobiography, Take It Like a Man.

George won the case and Brandon was ordered to pay £200,000 to Virgin Records, EMI Virgin Music, and the book publisher in costs. George received just £20,000 in legal fees from Brandon, as Brandon declared himself bankrupt.

He was sentenced to five days of community service, fined US$1,000, and ordered to attend a drug rehabilitation program.

Boy George was convicted in Snaresbrook Crown Court, London, on December 5, 2008, of the a s sault and false imprisonment of Audun Carlsen.

Boy George was sentenced to 15 months in jail on January 16, 2009, after being found guilty of falsely imprisoning Norwegian male escort Audun Carlsen, whom he met over the Internet.

Boy George's net worth is $35 million at present. He earns millions from his successful musical career. His highest-earning of his career was in 1983 with record sales of $6.7 million.