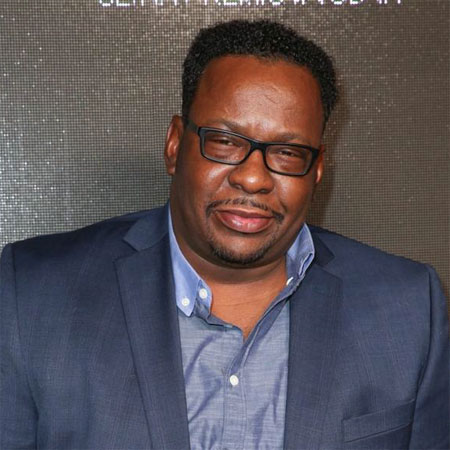 American singer and songwriter, Bobby Brown is the founder of New Edition, the group known for songs like "Cool It Now," "My Prerogative," and "Mr. Telephone Man."   He is also a dancer as well as an actor who appeared as a guest star in movies; Two Can Play That Game, Nora's Hair Salon Gang of Roses, and Go for Broke.
In 1990, Brown won a Grammy awards for Best Male R&B Vocal Lead in “Every Little Step.” He also won American Music Awards,  People’s Choice Award, and a Soul Train Music Award.

Brown married twice in his life and has six children.

Bobby Brown was born Robert Barisford Brown on 5th February 1969 in Boston, Massachusetts, the U.S. He belongs to Black-American ethnicity and holds an American nationality.

Brown was the second youngest of eight children born to Carol Brown, an elementary school teacher, and Herbert Brown, a construction worker.  He grew up along with his siblings in Roxbury's Orchard Park Projects in Massachusetts.

At the age of three, Brown joined the church choir, where his talent was noticed. As a boy, he was involved in stealing from stores and also in gangs.

During a fight, Brown was even shot in the knee. At the age of eleven, his friends were stabbed to death. After this incident, Brown turned a new leaf and began to take his education and life seriously.

In 1978, along with his childhood friends, Michael Bovines and Ricky Bell, Bobby Brown formed a band, New Edition. Ronnie DeVoe and Ralph Tresvant also joined the group, over the next four years of the establishment.

In 1982, they grabbed the second position in Hollywood Talent Night held at the Boston's Strand Theatre organized by music producer, Maurice Starr. Impressed by their performance, Maurice Starr signed them to his Streetwise Records.

The next year, New Edition’s debuted with the album, Candy Girl. His debut album boasted hits ‘Popcorn Love,’  ‘Is This the End,’ ‘Candy Girl’ and ‘Jealous Girl’ which topped the American R&B and the UK singles charts.

The band’s second album ‘New Edition’ was released in 1983. It bettered their debut album with hits such as ‘Cool It Now’ and ‘Mr. Telephone Man’, and achieved double platinum in the U.S.

Their 1985 ‘All for Love’ album, though certified platinum with hits as ‘A Little Bit of Love,’ ‘Count Me Out,’ and ‘With You All the Way,’ could not match the success of its predecessors.

Brown felt that the singers were being underpaid and Brown was also jealous of bandmate, Ralph Tresvant’s growing popularity. He left the band to go solo amidst the news that he was forced out.

In 1992, Brown’s album, Bobby sold 2 million copies but failed in comparison to his previous albums. Its singles, ‘Get Away,’ ‘ Humping Around,’ and ‘Good Enough,’ ‘That's The Way Love Is’ were hits.

In 1997, Brown’s fourth solo album, ‘Forever,’ released and bombed because of inadequate promotion and his insistence on writing and production of the tracks himself.

In 2005, Brown directed the reality series, ‘Being Bobby,’ for Bravo TV but the series folded after one season. New Edition members reunited to perform Jackson 5 hits as a tribute to the late Michael Jackson at the 2009 BET Awards.

Brown guest-appeared in movies such as ‘Two Can Play That Game,’ ‘Panther,’ ‘Nora's Hair Salon,’ ‘Gang of Roses,’ and had a major role in ‘A Thin Line Between Love and Hate.’

Bobby Brown married twice in his life and has six children. He was in a relationship with Kimberly 'Kim' Ward from 1989 to 1991 and has two children, La Princia and Robert Barisford Brown Jr together.

After splitting with Kim, he married singer, Whitney Houston who is six years younger than him and has a daughter, Bobbi Kristina Brown. They first met at the Soul Train Music Awards in 1989.

They began a close friendship after Houston invited Brown to her 26th birthday party in August 1989. Their friendship developed into romance in 1991.

In April 1992, Brown proposed for marriage to Houston and the pair married at Houston's estate on 18th July 1992. However, their marriage could not withstand his philandering & drugs abuse, and they divorced in 2007.

Even though he was in a marital relation with Houston, he had a secret affair with American author, Karrine Steffans who is most known the Vixen series of books. She has also worked as an actress as well as a video vixen; featured in more than 20 music videos.

In 2010, Brown got engaged to Television producer, Alicia Etheridge, who he proposed during a performance at Funk Fest in Jacksonville, Florida. Two years later, they tied the knot in June of 2012.

As a child, Brown was diagnosed with ADD and was later diagnosed with the bipolar disorder in his early 30's. He said that his drug of choice was marijuana and that he had developed alcoholism at an early age.

In late 2003, Brown was arrested for misdemeanor battery, allegedly for striking Houston while shouting epithets. In February of 2004, he was arrested and jailed in Georgia on a parole violation related to a previous drunk driving conviction.

In 2013, Brown was ordered to attend three Alcoholics Anonymous meetings weekly and to complete an 18-month alcohol program.

In June 2004, Brown was sentenced to 90 days prison for missing the payments of three months child support. However, he was immediately suspended from his all charges after paying back the amount of $15,000.

Despite the group's success, often Brown felt the group hasn't rightfully paid him as he deserves he said: