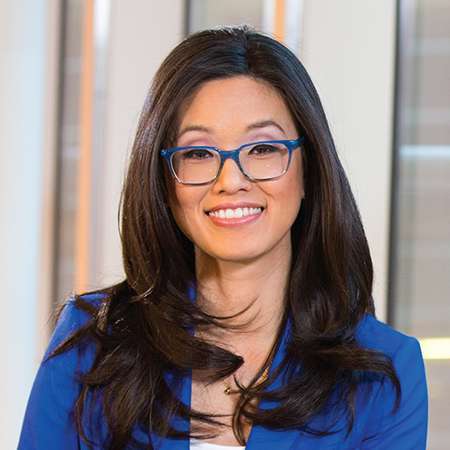 An anchor for Bloomberg Television and in its subsidiary Bloomberg L.P, Betty Liu, is an Award-winning journalist. Her tasks at the network involve taking interviews of the influential personalities who are involved in the business, politics, media, etc.

As for such, to highlight her works from the network, she has interviewed the famous personalities like Warren Buffet, Carlos Slim, Ted Turner and Lloyd Blankfein. She has been active in this field for more than a decade.

Betty Liu is also the founder and CEO of ed-tech startup Radiate, based in NYC

Betty Liu is an Asian born personality. She was born in Hong Kong and later her family moved to the United States when she was just at the age of three. She was raised in Philadelphia and has spent her years in there then after.

She had attended Central High School and majored in a degree of English from the University of Pennsylvania in the year 1995. Being born from Honk Kong parents and raised in America, she is fluent in Mandarin Chinese, English and can also speak some Cantonese.

After she left the job in there, she worked for several years at the Financial Times as the Atlanta Bureau Chief breaking the stories on top corporate and political leaders such as ex-chief executive of Coca-Cola Douglas Daft, former U.S President Jimmy Carter and former Home Depot CEO Bob Nardelli. For the coverage, she earned the recognition on TJFR’s Top journalists under 30 list for three years in a row from 2000-2002.

After some years in Financial Times, she moved to CNBC Asia as an anchor and correspondent covering the daily market action in Greater China for all CNBC’s morning shows and also for the CNBC’s shows Squawk Box. She is currently involved with Bloomberg Television Also has written The Wall Street Journal and Far Eastern Economic Review from the experience of her work in the financial zone.

As per her contribution, she has achieved several honors and awards. She has been the first female and an Asian from her school Central High School to be inducted into its Hall of Fame. Betty Liu is the name of a successful young journalist. She is an inspiration to many newcomers and the people who want to pursue their career in this field. Her current net worth is high and she enjoys a very satisfactory salary pay.

The Bloomberg news anchor Betty Liu’s estimated net worth is $2 million, as of August 2018. Her annual salary is $400K as of now. She has been working in this field for a long time. She also owns the Radiate Inc company.

Betty Liu is a beautiful woman of a graceful and pleasing personality. Being born to the Asian parents and being an Asian descendent, she has the Asian looks that feature dark eyes, black hair and short height. She stands the height of five feet and 3 inches tall. She has the dazzling smile and the gorgeous body. She never leaves the chance to flaunt her curves as she looks stunning in any of the outfits she fits in.

Moving on to her personal life, she is a married woman. She has been married twice. Initially, she was married to Benjamin L. Walter. However, their marital relation did not come out well ending in divorce in the year 2006.

Betty is a mother of two children, twin boys named Dylan and Zachary born in the year 2004 by her first husband. As she moved with time and the need of a father to her children and companion to her life, she is currently married to an Australian news executive named William with whom she met in Hong Kong. She is living happily with her husband and two children in Millburn, New Jersey.

Betty has captivated many of her audiences in her spell as she her presentation in the screen is just amazing and she is very camera friendly and obviously the financial news is every people’s concern. A lot of her admirers and audiences want to know more on her. She can be followed in her Instagram, Facebook and Twitter accounts. Besides, several other internet sites including Wikipedia, IMDb, YouTube, etc can be the best options to extract more information on her.