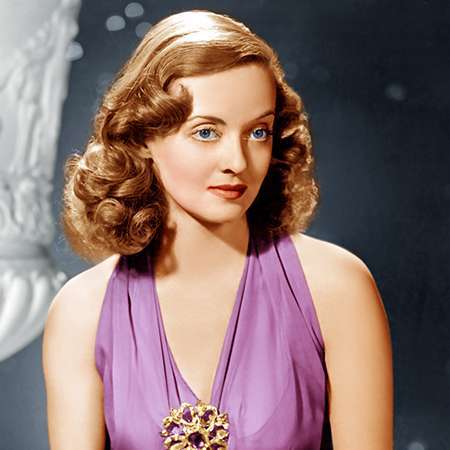 Ruth Elizabeth Davis was regarded as one of the greatest actresses in Hollywood history. She was an American actress of film, television, and theater noted for her willingness to play unsympathetic, sardonic characters.

She was well known for her performances in a range of film genres, from contemporary crime melodramas to historical and period films, suspense horror, and occasional comedies, although her greatest successes were her roles in romantic dramas.

Ruth Elizabeth “Bette” Davis was born on April 5, 1908, in Lowell, Ma s sachusetts at 55 Cedar Street. The actress died of breast cancer on October 6, 1989, in France She was the daughter to Ruth Augusta “Ruthie” and Harlow Davis. Her sibling was Sister Barbara Harriet “Bobby”.

She is of American nationality and of English, remote Scottish, Welsh ethnicity. She died at the age of 81. Her mostly black and white and many color pictures are available on the internet. Her pictures with several of her quotes are also available.

She was inspired to become an actress after seeing Mary Pickford in Little Lord Fauntleroy and Rudolph Valentino in the Four Horsemen of the Apocalypse. She did her Broadway debut in 1929 in “Broken Dishes” followed by Solid South.  When she entered Hollywood in December in 1930, she did not quite fit in for quite some time.

She was criticized severely, she failed her first screen test and Universal was in the verge of terminating her employment when it was suggested that she had beautiful eyes and could be used in the movie The Bad Sister. The movie was not successful and her next role in Seed was too short to do her any good.

After nine months of working in unsuccessful films and her contract terminated she got the offer from George Arliss to play Lead in the movie “The Man Who Played God” when she was just about to leave New York.

She considered it as her first Hollywood break. She signed a five-year contract with Warner Bros and went on to work with them for further 18 years. After more than twenty different roles Davis was seen as vicious and slatternly Mildred Rodgers in Of Human Bondage which was her first major critically acclaimed roles.

Her role of a troubled actress in Dangerous (1935) was also critically praised. While in W&B she saw success from 1934 to 1941. Her some of the other hit movies were Marked Women, Jezebel, Dark Victory, The Old Maid, Juarez, The private lives of Elizabeth and Essex. The latter one was her very first color movie.

All this and Heaven too was the most financially hit film for her and The Letter was rather a critically acclaimed movie. She saw lots of ups and downs and negative criticism forward in her career. Her other mentionable projects were: The Little Foxes, Now, Voyager, Old Acquaintance, The corn is green, Beyond the forest, All about Eve, Where love has gone, Hush Hush Sweet Charlotte and so on.

She often played sardonic and negative characters and gave lifelike performances to the roles. She sued W&B considering her career was going down due to the kind of mediocre film she was being forced to do but lost it. She is also the author of her partly autobiographical book “This n That”.

Her first husband was Hermon Nelson. They married in 1932 and got divorced in 1938. Bette had several abortions during the marriage and her husband filed a divorce on the basis of Bette being involved in a sexual relationship with Howard Hughes.

Her second husband was Arthur Farnsworth. They married in 1940 and her husband had an unfortunate death in 1943. She remarried again in 1945 with William Grant Sherry and got divorced in 1950. She had a daughter with Sherry named Barbara Sherry.

She married Gary Merrill in the year 1950 and got divorced in 1960. They had adopted two children namely: Margot Merrill and Michael Merrill. It was Bette’s eyes that got her role in the Bad Sister. The popular song “Bette Davis Eyes” was written in 1974 by Donna Weiss and Jackie DeShannon. The song got a commercial success after Kim Carnes recorded her version in 1981. The lyrics originally “She knows just what it takes to make a crow blush” due to the confusion was sang as pro blush by Carnes.

Bette Davis visited and thanked the songwriter and singer for the effort. On screen and off screen there was a visible feud between her and another actress Joan Crawford of her times. They have worked together in Whatever Happened to Baby Jane? A lot of stories of their feud were found. She once quoted about Joan Crawford “I wouldn’t piss on Joan Crawford if she were on fire”. One woman, she said “when a man gives his opinion, he’s a man. When a woman gives her opinion, she’s a b****h.