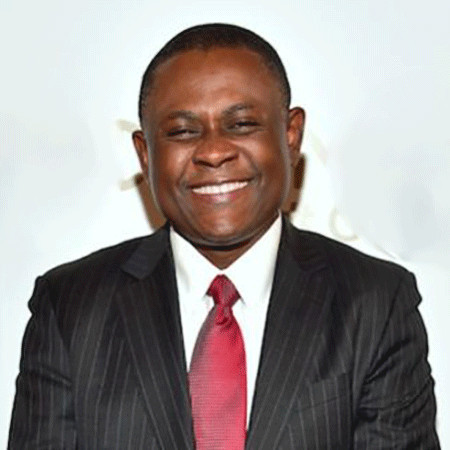 Bennet Ifeakandu Omalu is a Nigerian-American physician, forensic pathologist, and neuropathologist. He was the first to discover and publish findings of chronic traumatic encephalopathy (CTE) in American football players while working at the Allegheny County Coroner's Office in Pittsburgh. Later, he became the chief medical examiner for San Joaquin County and is the professor at the University of California, Davis, Department of Medical Pathology and Laboratory Medicine.

He has been married to Prema Mutiso, originally from Kenya. The couple shares two children, Ashly and Mark and resides in Lodi, California.

While he was working at the Allegheny County, Coroner’s office in Pittsburgh, he was the first to discover and publish findings of chronic traumatic encephalopathy in American football players. Bennet Omalu is also a chief medical examiner of San Joaquin County, California, and professor in the University of California.

Omalu was born in Nnokwa, Idemili South, Anambra in south-eastern Nigeria, during the Nigerian Civil war, which was very dangerous for her family and also for the whole country.

He has 7 siblings. Omalu’s mother was a seamstress and his father was a civil mining engineer and community leader in Enugu-Ukwu. Omalu spent his childhood in the predominantly Igbo village, while there was jeopardy of danger Nigerian Civil war.

Bennet Omalu started primary school at the age of three and earned entrance into the Federal Government College Enugu for secondary school. When he was 16 years, he attended medical school at the University of Nigeria, Nsukka.

After some time, he graduated with a bachelor of Medicine and Bachelor of Surgery (MBBS) in June 1990, and also he completed a clinical internship, followed by three years of doctoring.

Bennet Omalu first came to Seattle, Washington in 1994 to complete an epidemiology fellowship at the University of Washington.

After he shifted to New York City, he joined Columbia university’s Harlem Hospital Center for a residency training program in anatomic and clinical pathology which was the most beneficial for him. Particularly he was most interested in neuropathology and he holds eight advanced degrees and board certifications.

Omalu worked as chief medical examiner of San Joaquin County, California from 2007 until his resignation in 2017 after accusing county's Sheriff who doubles as Coroner, of repeatedly interfering with death investigations to protect law enforcement officers who killed people.

An assistant forensic pathologist who joined the office for the opportunity to work with Omalu, resigned a few days earlier citing similar allegations.

Omalu also worked as a professor in the UC Davis Department of Medical Pathology and Laboratory Medicine.

Bennet Omalu’s of former Pittsburg Steelers player Mike Webster in 2002 led to the re-emergence of a neurologic condition associated with chronic head trauma called chronic traumatic encephalopathy. Omalu’s published a second Neurosurgery paper based on his finding in the brain of former NFL player Terry Long.

Bennet Omalu is married to Prema Mutiso, originally from Kenya, and has two children; a daughter named Ashly and a son named Mark. He became a naturalized U.S citizen in February 2015 and is practicing Catholic. He resides in Lodi, California with his wife and children.