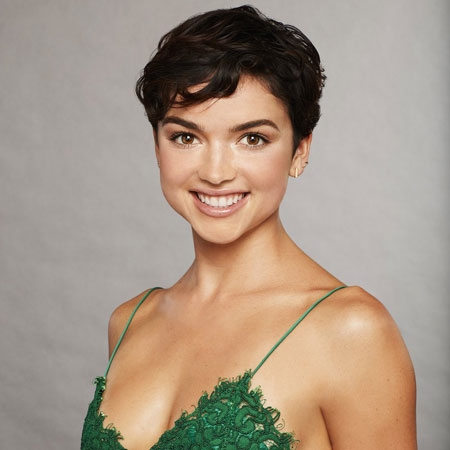 Bekah Martinez is a reality star popular for The Bachelor season 22 aired on ABC on January 1, 2018. She is originally from Fresno, California.

Bekah Martinez popularly known as Bekah M was born on February 10, 1995, in Fresno, CA. She has four siblings, Joel and Rachel being two of them.

Martinez went to University High School  ( 9th-12 grade) located on the campus of California State University, Fresno. She went to her prom with Myric McGhee in January 2016. She was recently accepted to major in art in UC Irvine.

Before becoming a contestant on The Bachelor season 22, Bekah Martinez worked as a nanny in Fresno, California.

ABC revealed The Bachelor cast in December 2017 of which Martinez was also a part. She is one of the 29 women to compete for Arie Luyendyk Jr, a former race driver and real estate agent from Arizona. The 36-year-old bachelor was the runner-up on Emily Maynard's season of The Bachelorette.

Bekah Martinez is popular as Bekah M on the show, she also became popular for not revealing her age. This season contestants will travel to Lake Tahoe, Paris, Florida, France, Tuscany, Peru, and Italy. Racing driver Robby Gordon, French singer Pauline Paris, singer/songwriter Connor Duermit, wrestler Kenny King, and Ursula Hayden and Angelina Altishin from Gorgeous Ladies of Wrestling are set to make appearances on the show this year.

The Bachelor blogger Steve Carbone calls Martinez ''the Corinne of this season'', referring to Corinne Olympios from The Bachelor Nick Viall's season.

'Bekah-M' has come under a lot of controversies for not revealing her age on The Bachelor, with people calling her too young to be on the show. Even though the reality star hasn't confirmed it, her age is allegedly 22. The average age of the contestants on The Bachelor is 27.

Martinez is an avid outdoor sports enthusiast, she loves rock climbing and hiking. She loves climbing with her brother Joel. She was invited to nationals for rock climbing and stood third place on the west coast in her division.

She is popular for her pixie cut hair, 90's fashion sense and also for her armpit photo on Instagram. The rock climbing enthusiast is a free spirit and doesn't like wearing bras, she apparently doesn't even own any.

When asked where do you see yourself in five years, Martinez answered she'd like to have an art studio for children or teach art and be hopefully married and planning for babies.

Bekah Martinez' guilty pleasure is eating bags of popcorns instead of meals and binge-watching reality TV. She says she is most afraid of either being trapped in an unfulfilling life or losing her support system.

She likes to talk, interact with people and being the center of attention.

Bekah Martinez is 5'5'' tall. She has only ever worked as a nanny, considering that she might not have a heavy income or a net worth as of yet. She moved to Los Angeles, California for her career in Glamour.