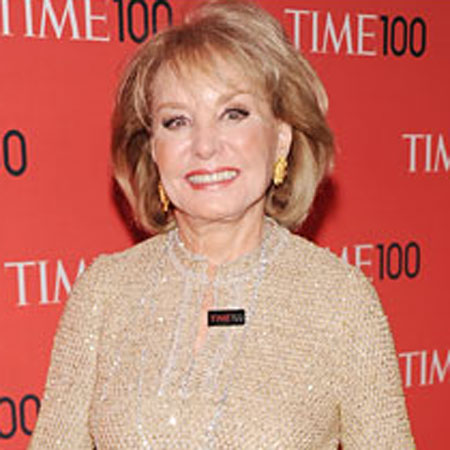 Barbara Walter is an American journalist, and also an author and television personality. She has gained her fame hosting different television programs like Today and the view, co-anchored ABC evening news and also contributed to ABC News.

Barbara Walter was born on September 25 in 1929 in Boston.  She is a daughter to Dena and Lou Walters. Both of her parents are Jewish and descendants of refugees from the former Russian Empire.

She herself admits that she has no religious training and follows any religion. Her father produced Ziegfeld Follies of 1943 and has also experience in direction so it can be said that acting was on her blood. She has one brother and one elder sister.

Unfortunately her brother died of pneumonia and sister of ovarian cancer. Her father used to take her to the rehearsals of the night club where he directed and produced. So from there also she learned a great deal about the industry.

Barbara Walter began her work with host Hugh Downs from 1962  on morning NBC News program The Today Show. She is a very talented and dedicated person once she also wore a swimsuit when the model did not show up.

Also because of her excellent interviewing ability, she was allowed more air time in programs. She also worked as co-host and producer from 1979-2004. She is a versatile person who is engaged in anchoring, reporting and corresponding for ABC News along with producing her own programs.

Talking about her achievements she has won various awards till now. She won Daytime and Prime Time Emmy Awards, women in film Lucy Award and a GLAAD Excellence in Media award. She was also honored with Disney legends awards due to her outstanding contribution to The Walt Disney Company in 2008.

Similarly, she also received a Lifetime Achievement Award from the New York Women’s Agenda. It has been reported that her base salary range from $4 million. But when we add up additional fees for her specials her annual salary would be around $7-$8 million range.

She is also a writer. Once she wrote How to Talk with Practically Anybody about Practically Anything. Later on, she got the opportunity to publish it as a book. To her surprise, the book turned out to be a ma s sive success.

In 2008, the book had gone through eight printings and sold hundreds of thousands of copies worldwide. Likewise, the book has been translated into six different languages. Apart from that book she also published her autobiography named Audition: A Memoir in 2008.

As of 2018, she has an estimated net worth of $170 million, as per celebrity net worth. Moreover, she was drawing a $12 million annual salary.

Barbara Walter has been married to three different men. Robert Katz is her first husband who is a business executive and former Navy lieutenant. Their marriage failed after 11 months in 1957. After that, she was married to Lee Guber who is a producer and theater owner in 1963.

Their divorce happened in 1976. They have one daughter together born in 1968. Later on, she married Merv Adelson in 1981 but this marriage also failed and they got separated in 1984. A strange thing is they remarried and again divorced.

Nowadays, she has been dating lots of men from the industries. She has dated John Warner in 1990s and in 2007 she dated Robert Neil Butler who is the winner of Pulitzer Prize. She says that not having children is the greatest regret in her life.