Barbara Marten is a British actress. She is best known for playing the role of Eve Montgomery in BBC One medical drama series, Casualty, Laura Meadows in ITV's The Bill, and DS Haydon in BBC One soap opera EastEnders.

Barbara attended an all-girls school called William Newton School in Norton. She then went to the Stockton and Billingham Technical College and later enrolled at a drama school at the London Academy of Music and Dramatic Art for three years.

Who is Barbara Marten married to? Husband & Children

Marten is married to her longtime husband, Mike Kenny. Mike is one of England’s leading writers specializing in young people’s theatre, and his plays are performed throughout the UK and all over the world. Though it is not known when the couple tied the knot, they first met in the 1980s while acting in a student pantomime at a training college in Birmingham. At the time, both were studying to become a teacher.

Together, they have three sons: Josh Kenny, Billy Kenny, Theo Kenny, who are all adults now. Barbara named one of her sons Theo, which means "gift of God," believing she would not be able to have children after suffering a miscarriage. While talking about her secret to a four-decade-long relationship with husband Mike, she mentioned both have been able to keep their personal and professional life balanced. 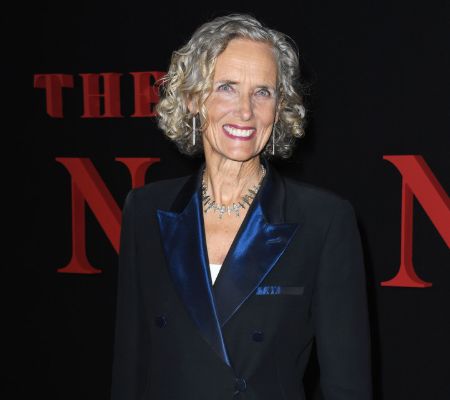 CAPTION: Barbara Marten during the premiere of "The Turning" at TCL Chinese Theatre in January 2020. SOURCE: Zimbio

"Home is family, work is outside. At first we were both actors, so we were always talking about work. Then we had a family and our eldest son still talks about being our crash test dummy, so we made our relationship work by not bringing work too much into the home," Marten told The York Press.

They previously lived in Leeds and later moved to York, where they have been residing since 2004. Moreover, two of their son studied at the Steiner School in Fulford and are now living in London. One of their sons completed his bachelor's in the mid-2010s, and their other son works in Leeds. Marten and Kenny's eldest son was 23 years old in early 2004.

What is Barbara Marten's net worth in 2021? Movies & TV Shows

According to some online sources, Marten's net worth is estimated at $2 million as of 2021. She started her career playing the role of Barbara Quinn in the television soap opera, The Practice in 1985. From 1997 to 1999, Barbara played the role of nurse Eve Montgomery in the medical drama series Casualty.

The 74-year-old has since appeared in various television production, earning acclaim for her performance in dramas such as Bob & Rose and Fat Friends. Marten portrayed the lead role of Ellen in the British movie Between Two Women in 2000 and appeared as Moira in a two-part drama mini-series, A Pa s sionate Woman, in 2010.