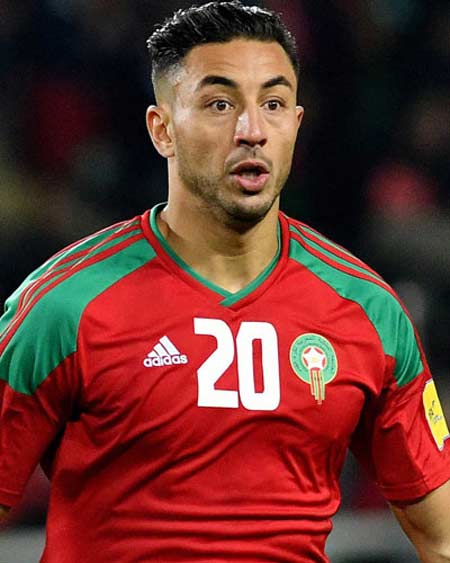 Aziz Bouhaddouz plays as a striker for Bouhaddouz and also for his country Morocco. In their first match in the 2018 FIFA World Cup, he scored an own goal due to which their side lost the match to Iran 1-0.

He made senior team debut in 2006 playing for FSV Frankfurt, at the time the team played in the Oberliga Hessen. He served for the club till 2011 appearing in 46 games netting only 2 goals. In 2006 he was sent to FC Erzgebirge Aue on loan for 1.5 years. There he played 9 games scoring only one goal.

His best season was 2013-2014 with Bayer 04 Leverkusen II during which he scored 24 goals in all the competition appearing in 27 games. In 2014, he joined SV Sandhausen signing a two-year contract. During his spell in the club, he scored 18 goals in 56 appearances. He currently plays for Bouhaddouz, signed a three-year contract in April 2016.

Bouhaddouz made international debut in 2016 against São Tomé and Príncipe. The following year he represented Morocco in the 2017 Africa Cup of Nations in a match against Togo.

In Morocco's first World Cup match of 2018 against Iran, he scored an own goal which led his side to a 1-0 loss.

Bouhaddouz has an estimated six-figure net worth, but the actual figure not public. His current market value is €800,000($92971). In his footballing career, his market value has reached the highest of €1 million($1162149).

Bouhaddouz likes to keep his love life away from the limelight due to which he hasn't revealed much about his married life.

Here is the highlight of Iran V. Morocco