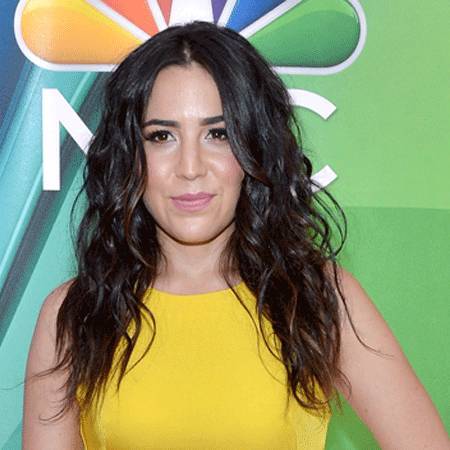 Audrey Esparza is a successful and popular American actress. She is a sensational actress and her portrayals are of another level. She has more to achieve in future and she will get there as she is so much talent and so hard working. She has been active in the industry since the year 2011 and in this short period of time, she has been able to win hearts already.

The actress Audrey Esparza was born on March 4, 1986, in Laredo, Texas. She has two siblings but their names are unavailable. According to some reliable online sites, Audrey Esparza's father's name is Felipe Heberto Esparza and her mother's name is Sandra Lee.

Esparza moved to New York City to study acting while she was only 18. In NYC, Esparza went ton New York University's Tisch School of Arts. She has been a phenomenal actress and she has been so perfect while choosing the roles.

Esparza is American as per her nationality and as far as her ethnicity is concerned, she is mixed. Her birth sign is Pisces.

Audrey Esparza started working on the stage at the beginning of her career. Before she got associated with television series, she performed in many theatrical projects.

Esparza has been an extraordinary actress and she has been so perfect while choosing the roles. She has selected the role which suits her acting style. She made her television debut in 2011, with the television film Family Practice where she worked as Liz Stratton. Two years later in 2013, she worked as Carmen in Amateurs.

One of the promising roles of actress Audrey Esparza came in 2014 when she worked as Carlotta in ABC series Black Box. In the series, Esparza appeared in 12 episodes.

Audrey Esparza was starred in the lead role in a television series four years after she started working as an actress.

Her breakthrough role came in 2015, where she was cast as the lead role of Tasha Zapata in NBC series Blind Spot. She is still working in the series at present.

Despite being the popular actress, Audrey Esparza has managed to keep her personal life and relationship status well under the wrap. Esparza is not married yet and is not dating any man at present.

Once, she was rumored to be in a relationship with her Blindspot co-star Sullivan Stapleton. She used to post photos of the couple on her social media which led her fans and the media workers to speculate about their affair, however, neither Esparza nor Stapleton spoke about the rumor.

Esparza has maintained her perfect body figure despite her busy schedule. She stands at a height of 5 feet 4 inches. Her body measurements are 34-25-35 inches.

Talking in an interview, Esparza revealed how she maintains her fitness, where she told she does different things which apparently depends on her day. She added, she runs on a treadmill, small muscular works, weight lifting. Every Sunday she goes to a dance class.

Audrey Esparza's Net Worth And Salary

Audrey Esparza's exact net worth is still under review. Looking at her success in her career we can predict her net worth to be in millions of dollars.

Actress Audry Esparza enjoys her work and is satisfied with her income from her work in the television series. She has been working as the lead actress in the Blindspot from which she receives over $100,000 annually.

Audrey Esparza has always enjoyed great income and this has always boosted her net worth to millions of dollars. However, the exact figure is not available right now. She is also available on popular social networking sites such as Twitter and Instagram. She has thousands of followers on Instagram.