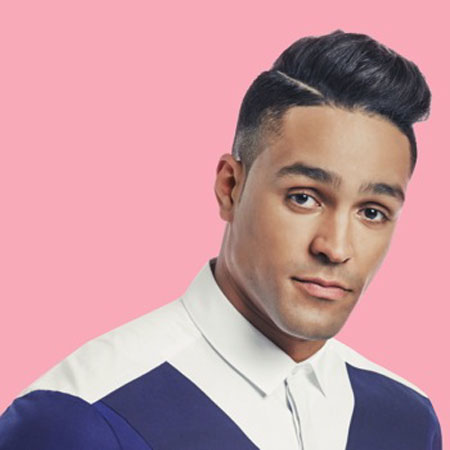 Ashley Banjo is an English dancer, choreographer, as well as an actor who first gained fame by winning the Britain's, Got Talent with his dance crew, Diversity.

Banjos is also recognized for his judging style on the Sky1 talent show, Got to Dance & as a host in BBC game show, Can't Touch This. He married Francesca Abbott in 2015.

Ashley Banjo was born as Ashley Modurotolu Banjo on 4th October 1988 in Leytonstone, England. He belongs to white ethnicity & holds a British nationality.

Banjo is born to English mother, Danielle Banjo, the former Ballet dancer and Nigerian father, Funso Banjo, a former professional boxer. He grew up with his siblings, Jordan and Talisa Banjo in Wickford, Essex.

Banjo went to St Johns School in Billericay & later joined SEEVIC College. He then studied physics and biology at Queen Mary, University, but after two years he dropped out to pursue a career in dancing.

Ashley Banjo and younger brother, Jordan, formed a band, Swift Moves, along with their nine friends in 2007 and later changed into Diversity. He was called "Chosen" by his group members. Before participating in BGT, they won the Street Dance Weekend.

In the year 2009, Banjo and his crew participated in the third series of British television talent show, British Got Talent, where they performed outstanding performance and impressed all the judges & public eventually winning the show.

They also got a chance to perform at the Royal Variety Show.

Diversity won the Pride of Britain Awards & also succeeded to get the nomination in the Dance section of South Bank Show awards. Banjo choreographed, produced & directed the tour for his band, "Digitized – Trapped In The Game" in 2012.

The following year, Banjo choreographed the tour for his band. He was offered to judge the five series of Sky1's dancing talent show, Got to Dance.

In 2015, Banjo did a show, Perspectives: Michael Jackson's Thriller with Ashley Banjo. The next years, he hosted the BBC game show, Can't Touch This.

In 2017, Banjo appeared as a judged in ITV series, Dance Dance Dance. Recently, he was offered to join the judging panel for the 10th season of Dancing on Ice in 2018.

The couple first met during the dance show in 2007. After having six years of affair, they engaged in October 2014. His wife, Abbott, is a member of his competitor team, Out of the Shadows.

British dancer, Ashley Banjo's estimated net worth is around $1 million, as per some online sources. He is not only famous but wealthy too. He also charged an impressive amount for his appearance on television shows.

Banjo won the third series of British got talent along with his team members & earned £100,000 (around £9,090 per member) as a winning amount.