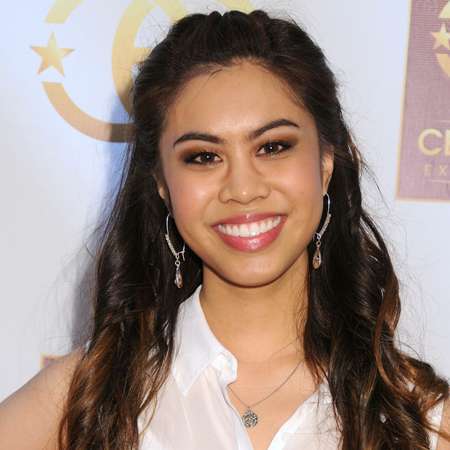 Ashley was nominated for the Libby Award by Peta2 for her work with adoption practices. She also has huge numbers of fan following on social networking sites.

Ashley Argota was born on January 9, 1993, in Redlands, California, United States of America. Ashley was born to Filipino parents and grew up with her older sister, Kevin.

She belongs to Filipino ethnicity and holds an American nationality.

Ashley Argota began her career as a contestant on the Arsenio Hall-hosted Star Search on CBS in 2003 where she became a semi-finalist.

Previously, Ashley was the youngest performer and the five times winner at Amateur Night at The Apollo. She has even titled the Star of Tomorrow at Showtime at The Apollo.

In the year 2007, Ashley debuted in the American independent drama film, Schooled as Soomi Alverez. Later, she appeared in several movies including, Bucket & Skinner's Epic Adventures, How to Build a Better Boy and more.

Ashley is currently working on Adopted, All Hallows’ Eve and has Cover Versions in post production which is due for 2017 but is always known for her work as Lulu in Nickelodeon sitcom True Jackson VP.

Ashley Argota was in a relationship with Trevor Michael Brown since 2007. Her boyfriend Trevor is an American professional baseball catcher for the San Francisco Giants of Major League Baseball.

After two years relationship, Ashley and Trevor split up in 2009. They even did a romantic cover of ‘Two is Better Than One-Boys Like Girls’ in November of 2012.

Ashley and Nathan Kress were romantically connected to each other since October 2009. Nathan is an American actor, director, as well as a former professional child model.

The two were close to each other which raised suspicious eyebrows of many tabloids. One of the remarkable public moments was when Ashley Argota surprised her lover with a hug from the back at the premiere of 16 wishes in July of 2010.

However, the relationship only lasted about a year as they broke up in 2010. And her ex-boyfriend Nathan married Elise Kress in 2015.

I've never had a boyfriend. My first kiss was the one on True Jackson's last episode

There was also a rumor that, Ashley is secretly dating Brian Craig who is an award-winning American actor after she referred him as her TV boyfriend. However, it’s not sure either they are dating, or he is just her crush.

Ashley Argota has appeared in significant roles in several movies and TV series. As per the income from the movies, she has collected the net worth of $500 thousand.

Ashley stands at the height of 1.6m/ five feet and five inches with the body Measurements 34-25-36 inches.