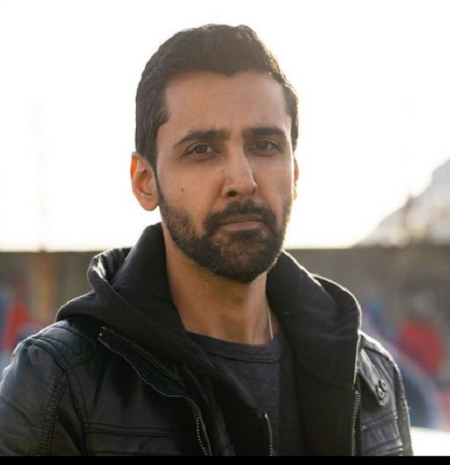 Arsher Ali is a British-Pakistani actor who is famous for his role in the movies like Line of Duty and Four Lions. The 37-years old actor won the Golden Nymph Award in 2013 for his work in Complicit. He is happily married to his wife, Roxy Shahidi, with whom he has one beautiful daughter.

Born on April 9, 1984, Ali is 37 years old now. He is originally from Nottingham, England. His parents are from Pakistan, but their identities are missing from the web. He holds British nationality and stands at the height of 6 feet 1 inch (1.85m).

The actor has been vocal throughout his career about the challenges faced by British Asian actors in the industry. And he has also fought continuously against racial typecasting. Ali attended the University of Essex' East 15 Acting School. Apart from acting, Ali is also interested in sports, and he is a keen supporter of Nottingham Forest Football Club.

Arsher came into the entertainment industry by landing the role of Radi in the tv series Trial & Retribution, released in 2007. In the same year, he also appeared in tv movies like Britz and Maxwell. And in 2010, Ali starred in the tv series Wallander alongside Tom Hiddleston, Jeany Spark, and Kenneth Branagh. His notable works can be seen in other tv series such as Masterpiece Mystery, Silent Witness, Beaver Falls, The Missing, etc.

Ali has mainly starred in tv movies and series, but we can see his appearance in films like Remainder, A Patch of Fog, The Ritual, Been So Long, The Dig, All in Good Time, etc. He played the part of George Edalji in the tv mini-series Arthur & George.

From 2015 to 2021, the Trial & Retribution cast made his portrayal in numerous hit projects, including Doctor Who, Line of Duty, The Darkest Universe, Ackley Bridge, To Provide All People, Hang-Ups, and Avenue 5. Currently, the actor is working on his new project The Fear Index, where we can see him as Hugo Quarry.

Ali Wife: How Many Child Does He Have?

Four Lions star is a married man who is happily matched to his wife, Roxy Shahidi. Both of them are engaged in the same field, and the star couple got married in 2010. Since then, the pair have been with each other in every step of their career and life.

And in 2018, they welcomed their first child, a baby girl. The happy family of three lives in the United Kingdom. Roxy was 34 years when she gave birth to her daughter. His wife is an established actress who is famous for his portrayal in hit television series like Emmerdale Farm and Sinchronicity.

Besides, she is also a fitness enthusiast and is a Yoga teacher. Ali is not active on any of the social platforms, but his life partner, Roxy, uses Instagram as @roxyshahidi. So, she uploads various pictures of her ongoing life through it.

Active since 2007, Arsher Ali has worked in numerous films and television series; he has more than 31 credits under his name. As per our speculations, Ali has a net worth of around $500,000 to $1 million. His primary source of revenue reaches from being an actor, and in the United Kingdom, the standard salary of an actor in the UK is around $32676.90 per year and $16.76 per hour.

Some of the movies and series he had starred in are mentioned below:-

On the other hand, his wife, Roxy, also makes decent money as an actress and a yoga teacher. Reportedly, she has a net value of around $1 million. Also, Roxy might make some profit from promotional ads. As per the Influencer Marketing Hub, she charges $241.5 - $402.5 for a single post on Instagram.