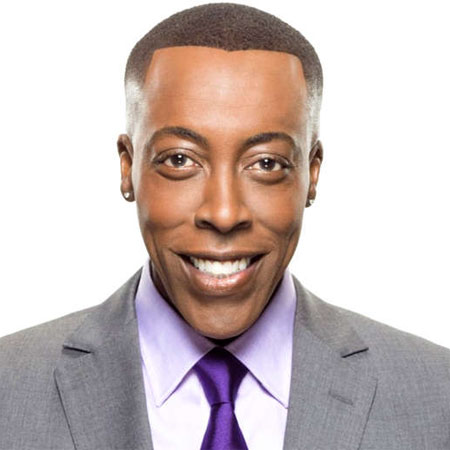 Arsenio Hall is an American actor, comedian, and talk show host. He is best recognized as a host of the late-night talk show called "The Arsenio Hall Show."

Hall is the winner of NBC's reality game show, Celebrity Apprentice held in 2012.

Arsenio Hall was born on February 12, 1956, in Cleveland, Ohio, United States of America. He belongs to Black-American ethnicity and holds an American nationality.

Hall is the son born to Fred Hall, a preacher, and, Anne Hall. His parents were separated when he was six years old. At age 7, he became interested in magic, & began performing at birthday parties, weddings & bar mitzvahs.

Hall went to the Ohio University in Athens, Ohio, majoring in communications, though he transferred & graduated from the Kent State University in Kent, Ohio.

Arsenio Hall started his career in 1984. He moved to Chicago and then Los Angeles to pursue a career in comedy. He made a couple of appearances an American music-dance TV program named Soul Train during the time.

Hall served as the announcer/sidekick for Alan Thickie in the short-lived talk show, Thickie of the Night.

In 1987, Hall made a replacement for Joan Rivers on The Late Show taking over his hosting duties. Two years later, he served as a host and executive producer on the show named The Arsenio Hall Show. The show became popular for its Dog Pound "Woof! Woof!" chant. The show also featured a range of popular guests including Pula Abdul, En Vogue, Bill Clinton, and Diana Ross.

Hall made several other appearances in the events including the MTV Video Music Awards. He has already appeared in movies including, Coming to America, Amazon Women on the Moon, and Harlem Nights, winning the NAACP Image Award for Outstanding Supporting Actor.

Hall has been a host on Star Search, The World’s Funniest Moments, The Tim Conway Jr. The show and more recently guest hosted Access Hollywood Live on NBC & Piers Morgan Tonight on CNN.

Hall regularly appeared on The Jay Leno Show & Lopez Tonight. In 2012, he appeared as a celebrity contestant on the fifth season of the reality series, The Celebrity Apprentice to raise funds for the Magic Johnson Foundation.

Hall has appeared as himself in the scores of other TV shows including, The Sharon Osbourne Show, Real Time with Bill Maher, Chappelle’s Show, Chelsea Lately, Late Night with Jimmy Fallon, Inside Edition, & The Wendy Williams Show to name a few.

Arsenio Hall is a married man and has children. He previously dated Paula Abdul. The duo was in relationship for few months and later broke up.

Hall has a baby boy, Arsenio Hall Jr but there’s no information regarding his wife as he is pretty uptight in sharing his details to the outer world which includes media and public.

After the birth of the baby boy, Hall mostly took time off to raise his son being a single father. He was out of the stage for about three years. Later he appeared on The Arsenio Hall Show after several years in 2013.

Although, he has an interest in joining the business his decisions were not confirmed until he appeared in the favorite show entitled Lopez Tonight.

Because of his permanent presence in television in America, Hall has retained his celebrity status in the entertainment industry. He earns a decent amount of salary from his career. As of now 2017, his net worth is around $5 million.