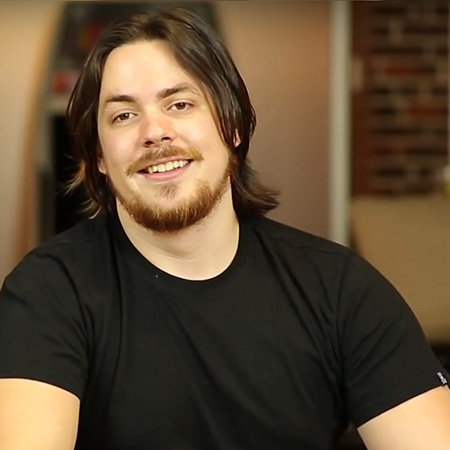 Arin Joseph Hanson is an American Internet personality. He is a multitalented person, famous as a comedian, voice actor, songwriter, rapper, animator, and a cartoonist. He was born on January 6, 1987 and is mostly known as the founder and co-star of the popular YouTube Let's Play web-series called ‘Game Grumps’. He is also famous as one third of the video game-based parody musical trio ‘Starbomb’.

Arin Hanson was born to Lloyd Hanson and Maurette Hanson. He has a brother named Nate Hanson. From an early age, he was passionate about animation. He created numerous animated shorts for Newgrounds.com. Newgrounds’ popularity rose in the early 2000’s, as Hanson’s work became a part of the website’s history. He was outstanding in his work with his signature sense of humor and animation style.

Arin Hanson is popularly known by his internet name ‘Egoraptor’. He has a YouTube channel of the same name, which is pretty famous for ‘The Awesome Series’, a series in which he parodies famous video games and franchises including Pokémon, Metal Gear and Final Fantasy. His channel is also known for his state of art comedy video game review series called ‘Sequelitis’.

As Arin Hanson's “Metal Gear Awesome” series was increasing getting more and more popular, Hanson was approached by MTV to produce animated shorts in the style of "Metal Gear Awesome" for MTV's online video gaming show, The G-Hole. The show did not last long, but his ‘Awesome’ series continued to appear in his YouTube channel.

The show was famous instantly among both Arin Hanson’s and Jafari’s channel, but Jafari left Game Grumps to focus on his own channel. He was replaced by Leigh Daniel Avidan of the musical comedy duo Ninja Sex Party. Game Grumps even moved to live performances at Hollywood Improv in late March 2016, and was completely sold out.

Arin Hanson is married to Suzy Berhow, who is a model and a Youtuber. She is a regular on Game Grumps spin offs like Grumpcade, Steam Train, Hunting Monsters and Table Flip. He currently lives in Glendale, California and has mentioned that he is not strictly heterosexual. Hanson, aka Egoraptor, has an estimated net worth of $600,000. He has many memorable quotes, one of which is “At age 6, I was born without a face.”