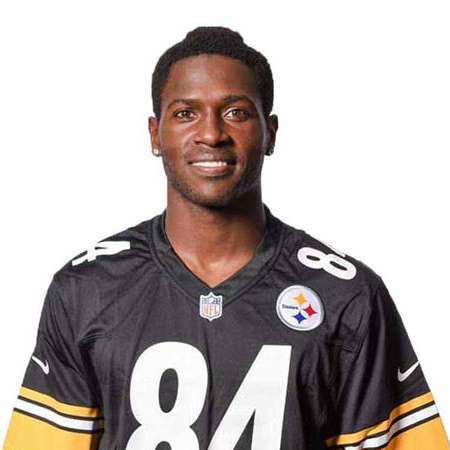 Antonio Brown is a professional football player. He plays as a wide receiver and punt returner for the Pittsburgh Steelers of the National Football League. He earned All-American honors as a punt returner in 2008 and 2009.

Antonio Brown was born on July 10, 1988, in Miami, Florida, U.S. He was born to a retired Arena Football League star Eddie Brown. His father is regarded as the best Arena League football player of all time.

He was really inspired by his father to become a football star. Brown, due to some dispute with his stepfather never gained the guidance he wanted. He is of Black ethnicity and is of American nationality.

Antonio attended the Miami Norland High School based in Miami, Florida. He also played as a running back, quarterback, wide receiver, and punt returner for the Vikings. He then went on to enroll at North Carolina Tech.

After some struggle, he moved to Central Michigan. He was picked as 195 in the sixth round of the 2010 NFL draft. He began playing his professional football career for Pittsburgh Steelers.

He is one of two players with Calvin Johnson to have at least 5,000 receiving yards in a three-year period. He signed a five-year deal with the Steelers for $42.5 million in 2012.

The Steelers made an agreement to trade Brown to the Oakland Raiders for the 2019 NFL Draft's third and a fifth-round selection, on March 9, 2019.

Antonio has not had a long dating history. He is reluctant to speak about his personal life in front of the public. There were rumors that Antonio Brown had been having an affair with many celebrities but all of them turned out to be fabricated.

Antonio was in a long relationship with his girlfriend, Shameika Brailsford. The couple looked very cute together. They had been dating for a long time but never got married. The reason for them not getting married was the various disputes and affairs.

As of now, Antonio has been in an on-and-off relationship with his girlfriend Chelsie Kyriss. The couple is also blessed with three children. They welcomed their first child a son named Autonomy Brown in 2014. In the following year, the couple became the parents of their second son Ali Brow. His long-time girlfriend Chelsie gave birth to their third son Apolo Brown, on 1st August 2017.

The American football wide receiver Jena Frumes previously dated the Instagram model Jena Frumes before rekindled with Chelsie. As of now, things appear to be going well. Brown was on a boat trip in Lake Tahoe to celebrate Chelsie’s 30th birthday with his three incredibly adorable kids. The family of five also traveled to Paris on the occasion of Brown’s 31st birthday.

Despite their long and loving relationship, the couple has yet to reveal their wedding plan. As

Other than that, Brown has not talked about having a spouse, getting married or divorced, or anything of that sort. He is seen vacationing with his children. They are very happy together. Brown is pushed by Big Ben for marriage but he simply pushes it away.