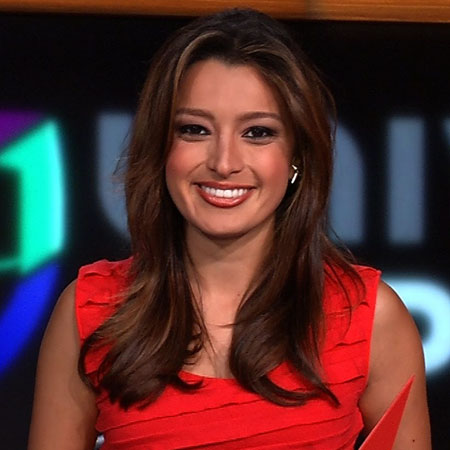 Antonietta Collins is a Mexican-American bilingual sports reporter. She currently works as a news anchor for a notable show of ESPN SportsCenter. She was also interested in soccer.

Antonietta Collins was born on November 22, 1985, in California. She is the daughter of Emmy Award winner Maria Antonieta Collins. Her mother is a Mexican journalist, TV host, and bestseller author of seven books. She also has an older sister and also has a stepfather named Fabio Fajardo.

Mi pa ... so lucky to have been his daughter Happy Father’s Day to all the papás out there “You only die when you’re forgotten, and I never forget you” // #CocoMovieQuotes “Solo se muere cuando se olvida y yo nunca te olvido” @pixarcoco

Her family moved to Mexico when she was a child and lived there until she was 9, she later relocated to the United States. Therefore, she has the citizenship of both countries. She lived in San Antonio for a year and moved to Miami.

Collins first learned to speak Spanish and learned English after she moved to Miami. She enrolled at Mount. Union College in Alliance, Ohio, where she completed Bachelor of Science in Communications.

Antonietta Collins is also actively involved in soccer from an early age. She made it to the Mexican national U19 woman team. She belongs to Mexican nationality and her ethnicity is white.

Antonietta Collins began her journalism career as a production a s sistant at the University of Miami after completing her graduation in 2007. At the same position, she also worked with many other national programs producers like Premios Lo Nuestro, Primer Impacto, and Nuestra Belleza.

Antonietta Collins became a production a s sistant in the CBS Sports Radio, where she reported for the Tampa Bay Buccaneers and University of South Florida football team.

After having a basic experience of her field, Antonietta Collins got the chance to become a news reporter for Univision Noticias 48/FOX2 news team under McAllen. There she reported some big American issues like illegal migration and drug smuggling in Texas/Mexico border.

Antonietta Collins moved to ESPN in 2013 and he started working as a part of the Digital Media team, news anchor, and analyst for video segments in every sports category for ESPN.com.  Later, her role on the ESPN expanded and started reporting on business issues and take interviews for the segment of ESPN’s Baseball Tonight.

Apart from that, Antonietta Collins is also fluent in Spanish language and made her appearance in One Nacion on ESPN Deportes as a host.

Antonietta Collins is an active sportscaster in ESPN network. ESPN is popularly known for paying a heavy salary to their employees. Even though we don't know her exact salary and net worth, looking at the other worker's salary from ESPN who works in the same position as Collins, her salary can be estimated to be around $200 thousand annually. All this adds up to her current six-figure net worth.

Antonietta Collins’s professional life is highly known only because of her journalism career as a sportscaster. She wants to keep secret her personal life. Information regarding her married and boyfriend are to be revealed. She is a huge fan of Barcelona, which we make clearly conclude from her Twitter account.

Collins is not married yet and is single right now. She currently resides with her mother in Miami, Florida.