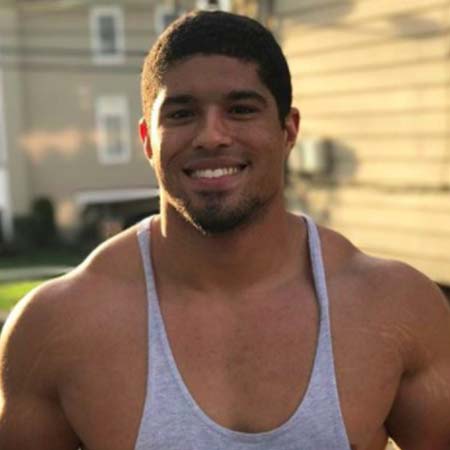 Anthony Bowens is an American Wrestler who is known for working in the Independent Wrestling Federation, where he has been able to win the title at the IWF 17th Annual LOUD n' PROUD Spring Spectacular in the year 2014. Apart from his career, he also came to the limelight after appearing with boyfriend Michael Pavano on their channel, Michael & Anthony.

Anthony Bowens was born on December 18, 1990, in Nutley, New Jersey and grew up along with his brother, Greg Bowens.

During his early life, while he was in school and college, he played baseball and later on, finished his career in it. Later on, he also developed his interest in wrestling but had no idea at the moment. He was noticed by Santino Marella, who believed he could be a wrestler in WWE roster where he trained.

Bowens explained to Marella that he was interested in wrestling but had no idea. So Marella suggested him and gave him the contact of  Pat Buck who trained newcomers at Create A Pro Wrestling Academy. He then visited the trainer and started getting training.

Anthony Bowens made his debut in the field of wrestling in 2013 and his first match was on April 13  for Kevin Knight's Independent Wrestling Federation in Nutley, New Jersey. Prior to this, he has wrestled throughout  Chaotic Wrestling, Beyond Wrestling,  Pro Wrestling Syndicate,  House Of Glory,  Five Borough Wrestling, Grand Slam Wrestling, and so on.

Apart from wrestling, he has also sign-in as a model with the BMG Models agency.

Anthony Bowens who has been in wrestling since a half-decade has must have a net worth of around six digits. Well, he has a net worth of seven digits that is, $1.2 million. An average salary of a wrestler is around $47,000 so he also might be receiving his salary in the same range.

He is also a model who might be receiving his salary of around $58,501 per year.

The 28 years old wrestler, Anthony Bowens is openly a member of LGBTQ. He is in a dating relationship with his boyfriend, Michael Pavano since March 2017.

While revealing about his relationship he explained that,

Just wanted to let everyone know I’m bisexual. I look forward to changing perceptions and breaking stereotypes as I continue on my journey.

Since then the couple is going very close in their relationship. If we go through the surface inspection of the couple's social media platform, we can see lost of cozy pictures of them together.

The pair have made a combined YouTube Channel which they have named Michael & Anthony. To this date, they have uploded more than 115 videos and have around 90k subscribers.

Came Out As a Gay, Not Bi-sexual

Anthony Bowens who stated that he was a bisexual in the year 2017, has recently said that he is actually gay. On January 1, 2019, he disclosed he is no longer bisexual. In one of his Facebook posts, he wrote that,

Two years ago I came out as bisexual which was truly how I viewed myself at the time. However, over the last 6 months or so I've started to identify less and less with that label to the point where it doesn't feel like it's "me" anymore. As people move on in their lives, the way they view the world and themselves tends to change and I'm no different. Which is why if you are to label me, I prefer to identify as gay.