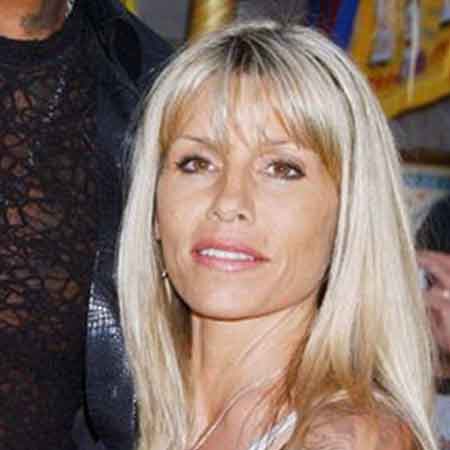 Annie Bakes is a former American adult model and author. She is famously known as an ex-wife of the former NBA player, Dennis Rodman. Her husband also made his recognition as a wrestler, actor and a TV personality. As an author, she published a book 'Worse Than He Says He Is: My Walk On The Wild Side With Dennis Rodman' in 1997.

Annie Bakes was born Anicka Bakes on February 26, 1965, in Allentown, Pennsylvania. She was born under the birth sign Pisces. She holds an American nationality and belongs to White ethnicity.

When Annie was the age of 16, a modeling agent came and offered her to be a model when she was in a mall. Annie told that when she told about it to her parents they thought it was a joke.

Prominence As A Model & Author

Annie started modeling in her teenage. She originally modeled for print commercials but when she turned 18, she started working in the lingerie and swimwear projects.

She started writing books after her modeling career and published a book Worse Than He Says He Is: My Walk On The Wild Side With Dennis Rodman in 1997. The book received lots of positive responses as well as it received 4 stars out of 5 from goodreads.com. Later, she published another edition of the book under the title White Girls Don't Bounce.

How Much Is Annie Bakes Net Worth?

Annie Bakes worked as a model in her starting career but she couldn't earn much money through her modeling career as she had to stop chasing her dream due to a miserable road accident. She also wrote a few numbers of books including her famous White Girls Don't Bounce with which she might have earned a lot of money, but the exact figurative collection of her money is not disclosed. As of 2019, the net worth of a former model is still under review.

According to some sources, Annie Bakes' ex-husband Dennis Rodman's net worth is estimated to be around $500 thousand.

Annie and Rodman first met at a nightclub in Sacramento in 1987 shortly after she stopped working as a model after her road accident. Annie thought he was a sweet and kind man when she first saw her. The couple started dating after a few meetings and a year later in 1988, she gave birth to her only daughter Alexis Rodman. After around four years of relationship, Annie and Dennis got married in 1991.

The marriage didn't go well and Annie even thought that it turned to be her disastrous decision even. Annie claimed that her spouse cheated on her and repeatedly forced her to undergo abortions 4 times. She also added that he was a serial adulterer who use to have an affair with a young and beautiful girl.

In 1993, she found that she had transmitted an STD from her then-husband Dennis which led the duo to a nasty fight and the couple ended up calling their marriage off. The same year, she filed for divorce which was finalized later that year. Dennis married twice after his first divorce and got divorced from them as well. He married a model Carmen Electra in 1998 but didn't last for long and got split a year later.

Due to her ex-husband's behavior, she even has to consult the therapist who suggested her to release her bad feeling through writing which was later on released. She titled the book, Worse than What He Says He Is: My Walk on the Wild Side with Dennis Rodman which is also released under the name White Girls Don’t Bounce.

The same year Dennis met Michelle Moyer and the couple gave birth to their son Dennis Junior and daughter Trinity Rodman. Dennis and Michelle tied the knot in 2003 but the marriage didn't last for long as wee as they got divorced in 2012. He had to pay over $860,000 for the child and spousal support.