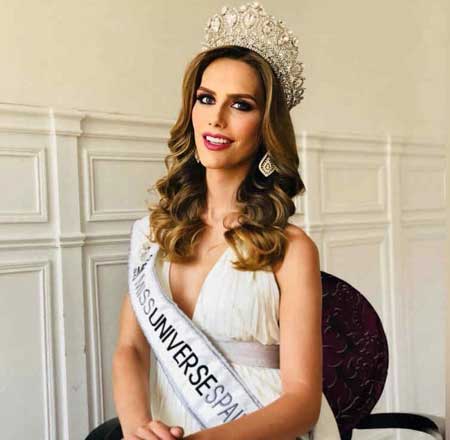 Angela Ponce is a pioneering model who is the first transgender model to participate in the Miss Universe. She represented Spain in the Miss Universe 2018. Ponce has been blazing a trail for the LGBTQ people who want to pursue their career in modeling.

Angela Ponce was born as Ángel Mario Ponce Camacho on 18 January 1991 in Pilas, Spain. She was born to mother Maria Jose Camacho Notario and father Eustaquio Ponce Moreno. She has a sister, Amanda Ponce Camacho. Her ethnicity is Hispanic and she holds a Spanish nationality.

Contrary to the general, Ponce's family was supportive of her decision to go through a gender transplant surgery. Ponce said she realized about her willingness to be a woman after watching a documentary as a kid. She even said the documentary helped her to identify her feelings. According to some online media, she has a degree in computing but has never really practiced it professionally. She is a transgender model like Amiyah Scott. 2018 is a year of firsts for trans people as the United States also got its first transgender candidate for Governor Christine Hallquist.

Angela Ponce started pursuing a modeling career after her gender transition. It was not easy for Ponce to make her space in modeling as a transgender model. After a few roller-coaster years, she got a chance to participate in Miss World Cadiz in 2015 which she ended as the pageant winner.

Ponce reached the acme of fame after she won the pageant. Magazines like Seville, Vogue Spain etc offered her jobs as well as some renowned Spanish agencies also tried to work with her. She is also a pioneer like Hari Nef, who is the first trans woman to be signed to IMG Worldwide.

After her initial success at the Miss World Cadiz, she went on to become the first transgender model to participate in Miss World Spain in 2018. She won the competition and confirmed her representation in the Miss Universe 2018 in Bankok, Thailand, a year after Demi-Leigh won the competition. Ponce went to Thailand in December for the Miss Universe pageant. She gave her strong performance at the pageant, but she failed to reach the top 20.

As of 2018, she has an estimated net worth of $1 million. Significant prize money and endorsements have boosted her net worth but she has not disclosed her income and the endorsement deals in the media. Ponce has been contacted by several companies which are trying to introduce diversity into their marketing strategies. Ponce would be the perfect role model for LGBTQ people all around the world so, her net worth is bound to increase a lot over the next few years.

Ponce is not married and dating anyone at present. The model hasn't revealed her relationship status and her dating life. She was fully supported by her family and says it was fundamental for her success in life. After her transition, she made headlines due to her career success and it has made her a star but she is still taking her time to take her private life to her fans. She has focused on her career and her modeling rather than relationships.