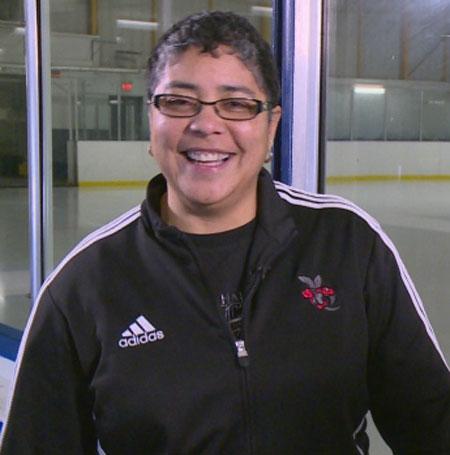 Angela James is a former Canadian ice hockey player, well known for her contribution in the highest levels of senior ice hockey from 1980 and 2000.

Angela James was born on 22 December 1964, in Toronto, Ontario to mother Donna Barrato, white Canadian and father Leo James, an Afro-American who moved to Canada to avoid racial segregation.

She was raised by her mother along with her two half-sisters with the help of government a s sistance. They lived in a small townhouse located in the Flemington Park neighborhood of Toronto.

Her mother served as a bookkeeper and at the concession stand of local arena. James also suffered from mental illness and depression. Her father never had a permanent place in her life during her childhood days, and couldn't provide financial support for the family. But he was always there when James needed him.

Angela James developed her interest in sports at a young age. Her godfather handed her a baseball bat and glove to celebrate her first holy communion. She quickly got hold of baseball, hockey, and synchronized swimming as a young girl.

James's mother wanted her to continue her career in swimming due to lack of scope for girls in hockey in the 1970s. However, she was very fond of hockey as she started playing ball hockey with boys from neighborhood since she was in kindergarten.

She played organized hockey for the first time at the age of eight. She played in Flemington Park boys house league, dominating the league.

James began in the novice(7-8 age group), but she was way more skilled than her partners and was shifted to the atom and then peewee with eleven and twelve years age group.

With immense love and interest for hockey, exposed to alcohol and drugs, and involved in fights, Angela James, somehow managed to graduate from Overlea High School with encouragement given by Ross Dixon, vice-principal of Valley Park Middle School. Later, she attended Seneca College in Toronto.

She was listed as a two-sport star for the Seneca Scouts. She became a part of the softball team in 1983 and played batting cleanup and the outfield. James was an Ontario Colleges Athletic Association all-star and forwarded her school the inaugural OCAA women's softball championship.

James has also listed as an OCAA all-star again 1984 and 1985, forwarding Seneca to another championship with a silver medal finish.

After a year of Senior C Hockey, Angela James moved to the Toronto Islanders in 1980, a Senior AA team in the newly founded Central Ontario Women's Hockey League. The league was at the highest level of the women's hockey in southern Ontario during the time, and within a year she became one of the stars of the league.

In 1982, when the Islanders folded, she shifted to Burlington, where she played for three seasons. The following year, James advanced her new team to the national title as Burlington captured the inaugural Abby Hoffman Cup.

Her contribution in the women's nationals was close to an annual event, as she played in 12 national championship tournaments. She changed her team very often, shifting for several reasons. Most of the times, James changed teams to follow her friends or due to disagreements with her coach's philosophy. She also moved due to necessity, like team ceased operations sometimes.

In 1986, James again followed Trempe to the Mississauga Warriors, with whom she played for three seasons. She won her first of seven consecutive COWHL scoring titles that season, later was loaned to Hamilton Golden Hawks for the 1987 Women's Nationals and a s sisted to the team achieve victory.

The Ontario Women's Hockey Association hosted the women's world championship in 1987 for the first time. The event was not sanctioned by the International Ice Hockey Federation, with six teams battling while various nations sent observers.

She had the choice to play for either team in the tournament and chose to play for her usual Mississauga team. James advanced Team Ontario throughout, after a 5-2 semi-final win over the United States, played for the title against Team Canada. But, was defeated by Team Canada, 4-0 in the final.

Angela James played three additional Women's World Championships, all three of the title was taken by Team Canada playing against the United States. She was also listed as all-star at forward in the 1992 tournaments in Tampere, Finland; Team Canada won the gold medal with a 8-0 victory.

The Americans put up a strong challenge at the 1994 tournament in Lake Placid, New York. Angela James made two goals. She was also named as the game's most valuable player in the final with a 6-3 victory. James achieved her fourth, and final world championship in 1997.

''Angela James was a ''defensive liability'' and suggested she was not a team player.''

James was devastated after being left out of the team and offended by Miller's explanations. She said she had been 'treated like a dog' and 'set up and cheated' by Miller and appealed the decision to Hockey Canada. She also disagreed and argued Miller's criticisms were unjustified and the coach previously maintained she was playing well. She was the nationals team's leading goal scorer in most of the games that forwarded the team to the national team camp.

During the time of appeal, rumors spread that Shannon Miller was having an affair with one of the players. While the allegations were unfounded, their timing led James being accused falsely of being their source.

Hockey Canada officials said that the rumors were started by a third party trying to create a controversy. They also rejected Angela James' appeal, ending her Olympic career.

Neither her opponents or teammates could understand how she was left off the team. Later, the United States and Canada were in finals, but the Americans won the gold with a 3-1 victory. Ex-teammates said that Angela James could have made a difference for Canada if she was in the game.

Angela James' international career ended in storybook fashion as the championship game, against the United States, went to a shootout. She was selected as the first shooter, James also scored the winning goal to lead Canada to a 3-2 victory. Altogether, she played in 50 games for Team Canada, making 33 goals and 21 a s sists.

Since her teenage, Angela James realized that she is interested in girls. In 1994, James met her partner Ange for the first time. After two years the couple officialized their relationship in a commitment ceremony.

Angela James has been listed as 'the first superstar of modern women's hockey.' She has also been hailed as a pioneer who brought the women's game into the mainstream.

Angela James has earned a good amount of money from her career as an ice hockey player. She has played a lot of games from which James has acc u mulated a net worth of $8 million.

She has also generated $3 million from her appearance in television series The Marilyn Denis Show in 2011. Currently, she is serving as a senior sports coordinator for Seneca.