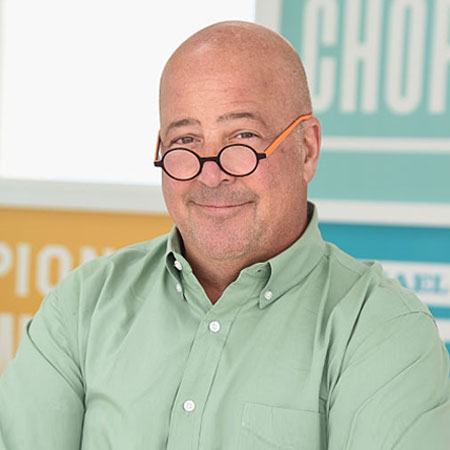 A person with the taste of life and food, Andrew Zimmern, is one of the versatile and knowledgeable personalities in the food world. He is a three-time James Beard Award, Winner. Besides, Andrew Zimmern is regarded as an inspiration for the bizarre transformation to success.

Andrew Zimmern was born on July 4, 1961, in New York City to father Robert S. Zimmern and mother Caren Heyman as Andrew Scott Zimmern. Andrew is the only son of his parents. Andrew Zimmern is an American by nationality and is Jewish by ethnicity. His parents got divorced when he was a kid, in the year 1967.

Andrew attended Dalton School and is a graduate of Vassar College. Andrew got interested in food since he was a little child. As his interest became his hobby, Andrew Zimmern started his formal training in culinary arts at the age of 14.

Andrew Zimmern's personal life is a story of motivation and inspiration. Andrew had a difficult early life as his parents got divorced when he was a child and he needed the love and care from both his father and mother.

Andrew got into severe drug and alcohol addiction. He was homeless for a year and lived in an abandoned building in Lower Manhattan with his bottle gang.

Andrew Zimmern has confessed he used to steal purses from the back of the chairs in the cafes down Madison Avenue and rob people for the sake of alcohol and drugs. His life was abusive, being abused and abusing people.

Career As a Chef

Andrew Zimmern took his past experiences as the prism for his present state. He took his life into different principles from what he went experienced in the past and that paved to success in his life.

After the drug and alcohol treatment, Andrew got a contract to work as an executive chef of Cafe Un Deux Trois in Minneapolis's Foshay Tower. He worked there for four and a half years gaining a wide acclamation and highest ratings from different national publications.

Andrew Zimmern then left doing the daily restaurants in 1997 and started being the food and lifestyle reporter for UPN's Everyday Living. He also served as the contributing editor and columnist for different paper print publications, international spokesman for Travel Leaders and Elite Destination Homes.

Andrew became the talk-chef after he commenced his radio career from his shows Chowhound's, The Andrew Zimmern Show and Food Court with Andrew Zimmern.

The show became an ultimate hit running its spinoffs. It is currently being recorded with Zimmern on location but it is said that Zimmern will be narrating it in the post-production. Apart from this, he is also a writer for Mpls. St. Paul Magazine.

The 51 years old, Andrew Zimmern is very down to earth person and is very frank. He has been a lovable son to his father and is a responsible father and husband as well.

Andrew is married to Rishia Haas on 26th December 2002. The couple met in 2000 and got smitten by each other's personalities. Not so long after their meeting, the couple started dating and got engaged in September 2001 during their Mexico trip.

Andrew and Rishia got married at St. Paul Judge Roseanne Nathanson in Minneapolis but they threw their marriage reception in June 2003.

Andrew and Rishia are the proud parents of a son, named Noah. He was born in 2005. The family is living a happy life ever after. They currently reside in their residence in Minnesota. Andrew is also a friend of Anthony Bourdain who is also a chef and a television personality.

The 5 feet 11 inches, Andrew Zimmern no wonder, earns a fortune. He is paid a good amount for his columns and is the host of the Bizarre Foods and Dining with Death. It is reported that he is paid around $35,000 dollars per episode. He also makes money from different TV appearances.

Andrew owns an X5 city car by BMW worth $60,000 dollars and luxurious home in Minnesota. He is reported to have an estimated net worth of $8 million dollars.