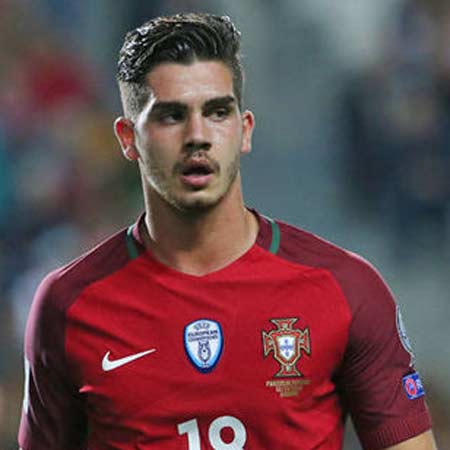 Referred as heir to Cristiano Ronaldo, Andre Silva is one of the brightest prospects of the upcoming generation of Portuguese football. Comparing him to five times Ballon'dor winner Ronaldo may be too premature, but for sure he is a huge talent and may fill the void of long-awaited versatile forward in Portuguese national team. He is comfortable playing in any position of the front three and always has an eye for goal. A heroic display for his home club Porto in 2016/17 season followed $57million transfer to AC Milan. He may not have lived up to the hype in his first season at Italy, but since then he is improving day by day.

He was named after his father Alvaro Silva and joined Porto based club S.C Salguerios when he was eight years old. For short stint, he went to Boavista FC but eventually return to Salgueiros. He started his career from FC Porto B team and was upgraded to the senior team in 2015.

His made his first appearance for FC Porto B team on 12 August 2013 against S.C Beira-Mar.  In his second season at Porto B team, he scored seven goals in thirty-four games and helped Porto team to finish in 13th position.

After his promotion to the senior team in 2015, he made his full debut for FC Porto in a 3-1 loss to C.S Maritimo.  He played as a fourth choice striker behind Dani Osvaldo, Abou Bakara, and Moussa Marega.

However, after the change of Manager from Jose Pesaro to Julen Loptegui he got more opportunities to play and scored his first goal for the senior team in the 4-0 win against Boavista in the last match of the campaign.

He added more versatility in his game in 2016/17 season which was also the breakthrough season for him. He scored two goals in his first two league games of the season against Rio Ave FC and G.D Estoril Praia. In his 41 appearances for Porto senior team, he scored 17 goals. By the end of the season, he signed a five-year contract with Porto with staggering $83 Million in his release clause.

2017/18 was a renaissance for big spenders A.C Milan and Silva was one of their additions. After Rui Costa, he was the 2nd most expensive player of the Milan history with a transfer of $57 Million with add-ons. On 27 July 2017, he played his first game for AC Milan in Europa league game against CS Universitatea Craiova.  Silva scored his first and only goal of the season in the league against Genoa FC which was a last-minute header in a 1-0 win.

Silva was a regular name on the team sheet during his youth level at Portugal. At Under 20 FIFA world cup he scored four goals in group stage leading Portugal to Quarterfinals. After his stellar performances in Youth levels, he was called by Portugal head coach Fernando Santos to play against Gibraltar for the senior team in August 2017. His first goal for Portugal came against Andorra in a 6-0 win in 2018 World cup qualifiers.

He was also selected for Fifa Confederations Cup held in Russia in 2017 and scored a goal against New Zealand in 4-0 win in the group stage.

On 2017/18 season Andre Silva joined Milan for staggering $57 Million which made him second biggest transfer of AC Milan history. It is reported that he earns $2.2 Million per year in A.C Milan and have the second highest wage bill in the Italian league. His estimated net worth is to be around $28 Million.

Apart from being a famous footballer Andre Silva likes to keep his personal life secret. According to some sources his girlfriend is Vanessa de Carmo. No further information about her is revealed.

Andre Silva currently lives in Milan, and his hobbies are to watch movies, series and play FIFA  in Videogames.

He has a brother named Alfonso Silva. His best friend is said to be his Portugal mate Cristiano Ronaldo which may be fake, but it is said that Ronaldo is a huge admirer of his game.