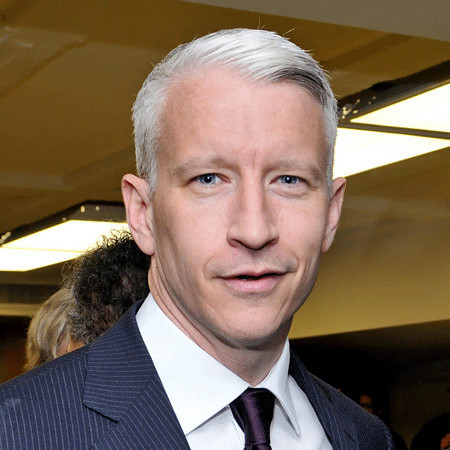 Anderson Cooper is a well-known journalist, television personality and author who anchors the news show Anderson Cooper 360. He broadcasts breaking news stories on the show and also has hosted his own syndicated daytime talk show Anderson Live. He was born on June 3, 1967 to writer Wyatt Emory Cooper and designer Gloria Vanderbilt. He was born to a rich family and inherits a large fortune from his family line.

Cooper’s media career started since a very small age as he was photographed for the Harper’s Bazaar as a baby and was a guest on The Tonight show with his mother. He was born in New York City and obtained his education from the Dalton School situated in New York /city. He then attended the Yale University and majored in political science. He supposedly suffered from dyslexia as a child.

After working for two summers in the CIA, he started his journalism career. He became the correspondent for ABC News on 1995. He rose eventually to the position of a co-anchor on the show World News Now and then hosted the show The Mole. On 2001, he left ABC to join the CNN. His co hosted the show American Morning and then became the anchor of his show Anderson Cooper 360 on September 8, 2003. He has covered several events since and has been deemed to be extremely successful in doing so. He also hosted a nationally syndicated talk show, Anderson Live from 2010 to 2013. Since 2007, he has also been working as correspondent for CBS and has voiced a Broadway show. He is also a versatile, freelance writer.

Cooper has been termed to be the most prominent openly gay journalist in TV. He avoided discussing his private life in interviews for a number of years previously. When gay marriage became legal in New York, this legendary journalist decided to send a mail to Andrew Sullivan on July 2, 2012 that he has been, is and always will be gay. He has been dating gay bar owner Benjamin Maisani since 2009 and has made the fact pretty clear to the public. He has never had any girlfriends and his previous relationships with boyfriends have not been known about. Even after dating for 6 years, the couple has not decided to get married yet. No news has come up even about their engagement and the couple has not made their intentions to get married clear to the public.

Cooper has a huge net worth of 100 million dollars which can be attributed to his inheritance, his journalism career and the sales of his books. His salary per year is estimated to be a whopping 11 million dollars. This handsome hunk has a height of 5 feet and 10 inches which is surely appealing to his fans.