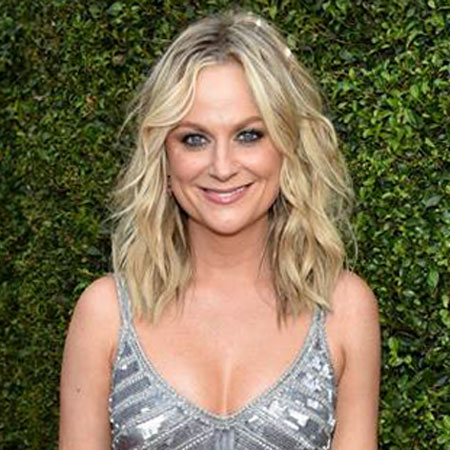 American actress, Amy Poehler is best known for starring as Leslie Knope in the NBC sitcom Parks and Recreation. She is an American actress, comedian, director, producer, and writer who became part of the Chicago-based improvisational comedy troupe Upright Citizens Brigade.

She was married to Canadian-American actor, Will Arnett from 2003-2016. They have two children.

Amy Meredith Poehler was born on September 16, 1971, in Burlington, Massachusetts, USA. Amy was born to high school teachers Eileen Frances and William Grinstead Poehler. Her father is of German, Irish, Portuguese, and English ancestry, and her mother is of Irish descent.

Poehler was raised in the Catholic faith. She graduated from Burlington High School in 1989. Then she attended Boston College where she joined the sketch comedy the group My Mother's Flea Bag. Poehler graduated from Boston College with a bachelor's degree in media and communications in 1993 and moved to Chicago, where she studied improvisational theatre at Second City.

Amy an American actress, comedian, voice artist, producer, and writer. In 1996, she moved to New York City after becoming part of the improvisational comedy troupe Upright Citizens Brigade, which was her first major TV show.

In 2008, she began producing a digital series with two of her friends, Meredith Walker and Amy Miles, Smart Girls at the Party, available through ON Networks.

In 2011, Poehler was included on Times magazine’s 100 most influential people in the world.

Amy Poehler's net worth is $25 million at present. She earns $200 thousand per episode, which has added up to her such an incredible net worth.

Poehler's work on SNL earned her two Primetime Emmy Award nominations for Outstanding Supporting Actress in a Comedy Series. Since 2009, she has starred as Leslie Knope in the NBC sitcom Parks and Recreation, for which she has been nominated for four Emmys for Outstanding Lead Actress in a Comedy Series, three Golden Globe Awards, and one Screen Actors Guild Award. She kissed her fellow award winner Bono at Best Actress in a TV Series, Musical or Comedy honor at the Golden Globes Awards.

Amy Poehler raps on "Saturday Night Live's" Weekend Update, alongside a dancing Sarah Palin. The song was a comedy parody which was a sarcastic blogger for all politicians.

Then on August 6, 2010, she gave birth to their second child. But in September 2012, Poehler and Arnett announced that they were ending their 9-year marriage and getting divorced.