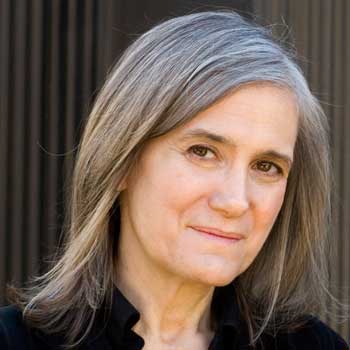 Amy Goodman is a prominent and respected American Broadcast journalist, a syndicated columnist, investigative reporter, and an author of five books including the New York Times bestseller Standing up to the Madness: Ordinary Heroes in Extraordinary Times.

Amy is the executive producer and host of the popular, daily, independent radio, internet, and television news program named Democracy Now! It is broadcasted on 650 stations around the world. The most talked-about investigative journalism coverage of hers is the East Timor independence movement and Chevron Corporation's role in Nigeria. For her hard work in her journalism career and for promoting peace around the globe, Amy has received various awards including Right Livelihood Award (2008), Izzy Award, Gandhi Peace Award, and many more.

Amy Goodman was born on 13th April 1957 in Washington D.C to father George Goodman who was an ophthalmologist and mother Dorothy who was a social worker. Amy and her siblings are of Orthodox Jewish heritage.

They were raised in Bay Shore, New York where Amy joined Bay Shore High School and graduated in 1975. Then she went on to graduate from Radcliffe College in 1984 with an anthropology degree.

She joined the College of the Atlantic in Bar Harbor, Maine, and studied there for a year before deciding to pursue a journalism career. Amy came into the limelight in 1991 when covering the East Timor independent movement.

She and her fellow journalist were badly beaten up by the Indonesian soldiers and they also witnessed a mass killing of Timorese demonstrators that later was termed the Santa Cruz Massacre.

Goodman and her colleagues went on to document Chevron Corporation’s role in a conflict between the Nigerian Army and villagers who seized oil rigs and various other tools belonging to the oil corporations.

Chevron helped with the provision of helicopter transport to the Nigerian Navy and Mobile Police to their Parabe oil platform on 28th May of the same year which had been occupied by the villagers that accused Chevron of polluting their land. The documentary titled “Drilling and Killing: Chevron and Nigeria’s Oil Dictatorship” bagged the George Polk Award that every year.

Amy was also the news director of Pacifica Radio station WBAI based in New York City for over 10 years. Amy in the meantime helped in the founding of Democracy Now! The War and Peace Report on 1996. The show was provisionally removed from the air because of the clash between Pacific Radio board members and Pacifica staff members and listeners in 2001.

Soon after it moved to a converted firehouse and began broadcasting until November 2009 when it moved to a studio located in Manhattan. Amy has been under various accusations and has been charged several times including Bill Clinton calling her approach hostile and combative when she challenged him for 28 minutes with questions during his quick get-out-the-vote message with WBAI on Election Say 2000.

"I think we need to understand that Trump is not playing by the rules of politics. He’s playing by the rules of branding." → Naomi Klein joined us in our studio today. Find the full interview at democracynow.org or wherever you get your podcasts! #naomiklein #democracynow #amygoodman #juangonzález #trump #analysis #independentmedia #donaldtrump #politics #business #interview #noisnotenough

Goodman and several of her colleagues from Democracy Now! were arrested by the police during the 2008 Republic National Convention while reporting on an anti-war protest. Amy was accused of obstructing a legal process and interfering with the police but was later released and all her charges were dropped.

As a result of Amy’s civil lawsuit against St.Paul and the Minneapolis police department and the secret service, there was a settlement of $100000 and an agreement that stated to educate officers in First Amendment rights of the members of the press as well as the public.

Among other various incidents, one was on 25th November 2009 when Amy was denied to enter Canada in order to attend a meeting at the Vancouver Public Library, for approximately 90 minutes at the Douglas border crossing.

She was later permitted to enter Canada put the customs took four photos of her and stapled a control document into her passport and demanded to leave Canada within 48 hours. Apart from all the insults, she has suffered, Amy is appreciated and respected as well by various people all around the world thus landing many awards into her lap.

She is the recipient of Robert F. Kennedy Prize for International Reporting in 1993, George Polk Award in 1998, Islamic Community Award in 2004 by the Council on American-Islamic Relations for journalism, Thomas Merton Award in the same year, Puffin/Nation Prize for Creative Citizenship, Right Livelihood Award in 2008, Izzy Award for Special achievement in independent media in 2009 and a Gandhi Award for a significant contribution to the promotion of enduring international peace.

Amy has written five books to date which include The Exception to the Rulers: Exposing Oily Politicians, War Profiteers and the Media That Love Them in 2004, Static: Government Liars, Media Cheerleaders, and the People who Fight Back in 2006.

Amy published Standing up to the Madness: Ordinary Heroes in Extraordinary Times in 2008 which went on to become a New York Times bestseller. Amy wrote Breaking the Sound Barrier in 2009 and The Silenced Majority: Stories of Uprisings, Occupations, Resistance, and hope in 2012.

Goodman has also narrated a film named One Bright Shining Moment: The Forgotten Summer of George McGovern in 2006 which later won the Sarasota Film Festival award for Best Documentary Feature.

Amy is currently 56 years of age and is still very active. In 2007 she discovered that she was suffering temporary Bell’s palsy but did not discuss it with the media which later resulted in Wikipedia stating that she had a stroke and that circulated and went on to be added in her bio and personal life articles.

Later she clarified by stating that she was actually suffering from Bell’s palsy, which causes inflammation in the seventh cranial nerve leading to problems in the eye, nose ear and temporary paralysis of the nerve as well.

Amy Goodman's Net Worth And Salary

Amy Goodman's net worth is $3 million at present. She earns a huge amount of salary from her successful career.

She has authored the books The Exception to the Rulers: Exposing Oily Politicians, War Profiteers, and the Media That Love Them, Static: Government Liars, Media Cheerleaders, and the People Who Fight Back, Standing up the Madness: Ordinary Heroes in Extraordinary Times, Breaking the Sound Barrier, The Silenced Majority: Stories of Uprisings, Occupations, Resistance, and Hope, and Democracy Now!: Twenty Years Covering the Movements Changing America.

As far as her personal life is concerned, she wishes to disclose very little about it and is currently married to her husband Denis Moynihan. No news about any kind of divorce issues between them has arisen and she has never revealed anything about the number of children she has.

For more updates on your favorite celebrity, follow Articlebio.