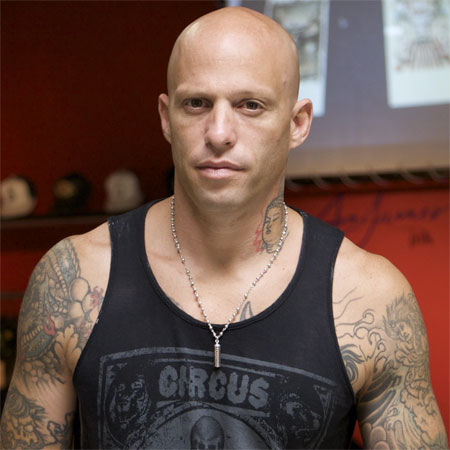 Ami James is a tattoo artist who is also the co-owner of tattoo parlor Love Hate Tattoos and DeVille Clothing. Ami has even co-founded Tattoodo, which is an online platform for getting the customer a custom-designed tattoo.

Ami James was born on 6th April 1972 in Israel. Ami's father was in the Israeli army. His father left the family when he was only four years old. As a child, he lived in both Israel and Egypt. He holds an American nationality and falls on white ethnicity.

In his teenage, Ami James moved back to Israel, and there in Israel Defense Force, he completed his military service as a sniper. He got his first tattoo at the age of 15. It was the experience that made him determined to become a tattoo artist.

In the year 1992, Ami James began his training with a tattoo artist named Lou at the Tattoos By Lou. He is the co-owner of the Love-Hate Tattoos in Miami Beach in Florida along with Chris Nunez, Along with Jesse Fleet and Nunez, he co-owns a clothing company named DeVille. With Nunez and two other friends he also co-owns a nightclub Love Hate Lounge.

For Motorola's RAZR V3 mobile phones Ami James has created designs. Along with Boston jeweler Larry Weymouth he has recently invested in a jewelry line named Love Hate Choppers Jewelry. He even hosted a reality show, Miami Link where appeared along with Kat Von D but Kat later left due to arguments with Ami.

Ami's new show NY Ink premiered on 2nd June 2011 and the second season of the show was premiered in December 2011. The show aired till 1st March 2012.

Ami James opened a tattoo studio named Love Hate Social Club in London in 2012 November. The following year for the Ink Not Mink campaign, he teamed up with PETA. In the year 2013 9th May, Ami co-founded Tattoodo, which is an online platform for getting the customer a custom-designed tattoo.

The estimated net worth of Ami is approximately $5.1 million.

Ami James has been married twice. His first wife was Andrea O'Brian. He married in September 2005 and the couple got divorced in the following year 2006. The same year on 11th October, he married Jordan Kidd. His wife is an American football player.

It is rumored that it is very difficult to live with because of his short temper. Recently it is also rumored that he got separated from Jordan Kidd and the custody of children is given to Kidd. But the rumor has not been confirmed yet.