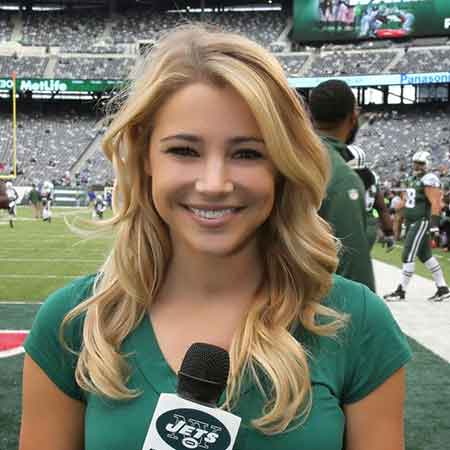 American journalist, Amanda Pflugrad currently serves as the reporter and host for the 17-Time World champion Boston Celtics where she conducts pre and post-game interviews with both the teams' players and coaches. She also hosts a live pregame show during every home game. Prior, Pflugrad worked as a sideline reporter for CBS Sports Network and female studio host for Total College Sports in Chicago.

Amanda Pflugrad was born on November 15, 1987, in Oregon, the USA to football coach, Robin Pflugrad, and Marlene Pflugrad. She has a younger brother, Aaron Pflugrad. Spending the majority of her childhood in Oregon, the media personality holds American nationality and belongs to the White ethnicity.

Pflugrad was a cheerleader for four years and served as a captain in her senior year. She was a member of the Warsaw Sports Marketing Club and served as a sideline reporter at Altitude Sports and Entertainment. In 2009, she was an Honorary Member of the Dean's list.

Pflugrad started her professional journalism career in 2011 in FOX Sports Arizona as a reporter and host where she worked for nearly 2 years covering both college and professional sports of Arizona State and University of Arizona football.

Then the rising journalist joined Travel Channel Internation and co-host a five-week travel segment interviewing teams and residents of small towns in America. In 2012, she was hired as a sports anchor at Total College Sports but left after working for 1.5 years.

Pflugrad served as a sideline reporter for CBS Sports Network from 2011 to 2014 where she covered the VP Beach Volleyball Tour. She joined the New York Jets as their team reporter and insider for the 2014-2015 NFL season.

Similarly, Pflugrad worked as a sideline reporter for ESPN/SEC Network, covering women's gymnastics in 2015. In 2018, she served at the 17-Time World Champion Boston Celtics as a reporter and studio host at NBC Sports Boston.

As per the estimation made by various genuine online sources, the media personality has a net worth of $700k, as of 2021. She owns a house in Boston Massachusetts.

The renowned host is in a romantic relationship with her longtime boyfriend, William Alexander, Head strength, and Conditioning coach at Massachusetts. The couple is together for quite a long time. She often shares pictures of her beau on her Instagram where she has 27.3k+ followers as of 2021.

The couple yet to share any information about when they met and how their love story started.

Previously, Pflugrad dated fellow Oregon University student, Dalton Kerrigan. But the duo failed to handle their love life and split apart after a short period of dating. In 2014, Jadednews.com released a joke statement that Pflugrad killed Kerrigan accidentally with a t-shirt cannon after he found her on a kiss-cam with another girl.

Pflugrad is a dog lover and she has a bulldog. She loves vacationing with her boyfriend and friends. She had a keen interest in sports since her early days.

Below we present the video of Amanda Pflugrad,