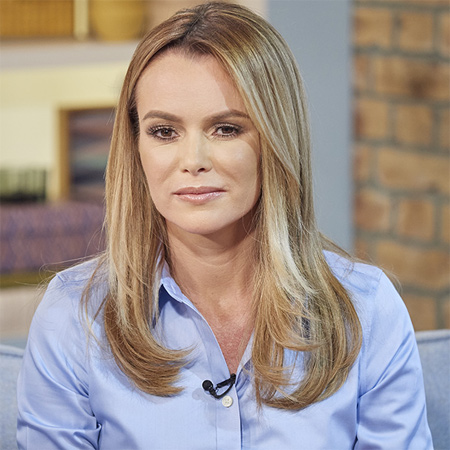 Amanda Holden is an English presenter, actress, as well as a singer, best known as a judge on ITV's Britain's, Got Talent since the show began in 2007.

Holden nominated for the Laurence Olivier Theatre Award for her roles on the shows Big Top and Wild at Heart.

Amanda Holden was born as Amanda Louise  Holden on 16 February 1971 in Portsmouth, Hampshire, UK. She holds British nationality and white ethnicity. She has a younger sister, Debbie, who is a model.

Holden spent much of her childhood in Bishop's Waltham and where she joined Bishop’s Waltham Little Theatre Company at the age of nine. She has been vegetarian since she was thirteen.

Holden joined Swanmore Secondary School. Later she moved to Bournemouth where Holden enrolled at the Mountview Academy of Theatre Arts.

Amanda Holden has worked in television series, movies, & theaters and in all of them, she has been able to shine brilliantly.

Holden began her television career with British dating game show, Blind Date in 1991 where she was one of the contestants in this one.

Some of other television series Holden has been a part some series including,  Kiss Me Kate, Heart, & Bones, Ready When You Are and Jack Rosenthal. Her most amazing work has come as a judge in a reality show called Britain Got Talent.

In the year 1996, Holden played the role of Pamela in a very nice movie called Intimate Relation. She also appeared in another movie called One Chance in the year 2013.

Beside this, Holden has also worked as a gossip columnist for News of the World. She has been absolutely mesmerizing in TV commercial advertisements. She has done advertisements of Tesco and Danone Uykos in the past.

Amanda Holden married to comedian Les Dennis in 1995 but they separated unofficially after a four-year relationship in 2000 when Holden's link up with actor Neil Morrissey was exposed in the press, before eventually separating in December 2002 and divorcing in 2003.

During the time, Holden alleged that she was sexually assaulted by an "unnamed famous comedian" at a public event.

Holden engaged to record producer Chris Hughes in 2004 and with whom she gave birth to her first child, a daughter Alexa Louise Florence Hughes on January 20, 2006.

Holden married to her fiance on 10 December 2008 at Babington House with former Formula One racing driver David Coulthard acting as best man.

Holden  Miscarried her second child with four months of pregnancy in 2010. Again she was pregnant and the couple welcomed their second child, a son Theo Hughes on February 1, 2011.

Amanda Holden has been earning great money because of her high pay. She has a jaw-dropping net worth of $3 million, and this proves her success.