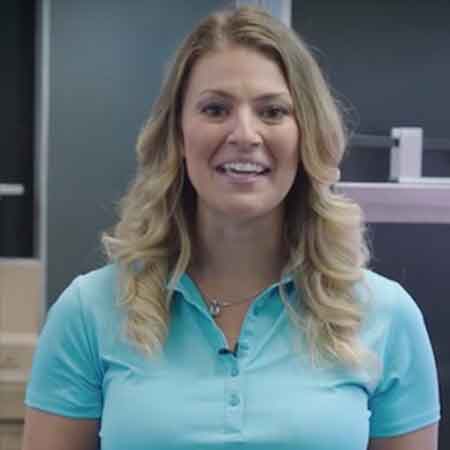 The Pittsburgh, Pennsylvania, native Amanda Balionis is known for working as a golf reporter for CBS Sports. For the network, she has covered several big golf tournaments. Previously, she worked at Trending on Tour, Buy a Mulligan, and PGA Tour Live. The sports journalist is a contributor for Turner Sports digital too.

Amanda Balionis was born in Pittsburgh, Pennsylvania, United States. She was raised in her hometown Pittsburgh along with her family. She is the daughter of Anthony Balionis and Dana Balionis.

Balionis is quite close to her parents.  As a child, they hugely inspired her to take golf as a hobby. Between the age of 8 and 9, she already played junior golf for a few years. Amanda attended Manheim Township High School from 2002 to 2004 and later went to the Hofstra University and graduated with a degree in broadcast journalism.

She started her journalism career while studying at the University, interning for New York Jets, ABC News NOW, New York Islanders and CBS2. Between the year 2008 and 2009, Amanda worked for the local Lancaster Newspaper as a Reporter where she hosted a weekly segment along with editing and hosting a range of sporting segments.

Later, Amanda got an opportunity to work on TV and soon started working as a Freelance Sideline Reporter for Verizon Sports. She began working as a reporter at MSG Network in 2009 and covered several high school sports. She interviewed for a digital position with PGATour.com in 2011. It was turned out to be a great opportunity to cover professional sports for her.

In 2017, Balionis became a golf reporter at CBS Sport. She also worked for various shows including Trending on Tour, Buy a Mulligan, and PGA Tour Live. She covered several tournaments on CBS, such as the Masters and the PGA Championship.

Balionis serves as a contributor for Turner Sports digital too.

Amanda Balionis' Net Worth And Salary

From her illustrious career, the sports journalist Amanda Balionis has garnered a large amount of money which as per some online sources is believed to be over $0.5 million. She currently serves as a golf reporter at CBS Sport where her annual salary ranges from $37,446 to $147,782.

Amanda Balionis is not married yet. And as of 2018, she is also not dating anyone officially. She has preferred to keep her personal life a secret.

Balionis is a proud owner of a French Bulldog named Chorizo. She has posted many beautiful pictures of her dog on her Instagram account where she has 84.1 k followers as of September 2018.

A fitting way to use this multi-photo function for the first time such a perfect morning in San Diego. I can't tell you how many times a day I say, "Chorizo, look where we live! It isn't real life." But it is. And I couldn't love it (or her tongue) any more

The Pittsburgh, Pennsylvania, native currently lives in San Diego, California, with her pet dog. Her favorite team is The Pittsburgh Steelers.

She is also engaged with many charity works like K9s for Warriors.