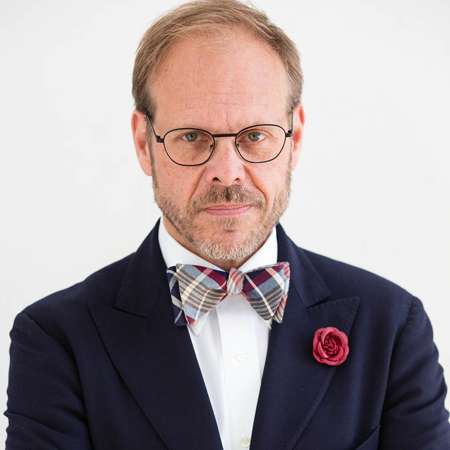 A well-known television personality, Alton Brown is also an actor, food show presenter, cinematographer, and author. He is also known as the host and creator of the Food Network TV show, Good Eats. he also hosted several shows.

Regarding his personal life, Brown has a daughter from his previous marriage. As of 2018, he is engaged to a restaurant designer.

Alton Brown was born Alton Crawford Brown on the 30th of July, 1962 in Los Angeles, California under the birth sign Leo. Brown is American by nationality and belongs to White ethnicity.

Brown is the son of Alton Brown Sr. who was a media executive in Georgia and plus was an owner of radio station WRWH. His father was also a publisher of the newspaper called, White County News.

Brown attended the University of Georgia as well as the New England Culinary Institute for his education. Initially, he became a cinematographer for several music videos like R.E.M's The One I Love.

Being dissatisfied by the quality of the food shows aired on American Television, Alton Brown set out to create and produce his own show as soon as his studied completed. He dislikes the single purpose tools used in the kitchen but accepts a few of them.

Brown then created his own show named Good Eats, which aired on 1998 July, on the PBS TV station WTTW. This show was liked locally and was hence picked up by the Food Network in 1999. The show ran for 14 seasons after which Alton decided to drop it.

Apart from this, Crawford has appeared, also in Iron Chef America: Battle of the Masters, where he served the role of an expert commentator. He also acted as the play by play commentator for the show. He has also appeared in the series Feasting on Asphalt which explores the history of eating while moving. This series too gave its part to make him a well-known personality in the field of food. He has also hosted the series Cutthroat Kitchen which too has been hugely popular with the audience. He has since appeared in several other cooking shows.

He authored several books like I'm Just Here for the Food which helped him to win the James Beard Foundation Awards in a category of Best Cookbook. The boo also became one of the best-selling cookbooks of 2002.

Besides, Brown also appeared in several commercial works for General Electric products. She even did promotion for Shun knives, Dannon yogurt, and for Heifer International.

According to Celebrity Net Worth, Alton Brown has an estimated net worth of $13 million whereas her net worth is estimated to be $3 million as per The Richest. He acc u mulated a huge amount from his career. He also earns much from his published books.

He married his love, Deanna Collins who is an executive producer on Good Eats. The relationship, however, did not last long and the couple split and got a divorce in 2015. The ex-husband and wife couple shares a child,  Zoey Brown who was born in 1999.

CAPTION: Alton Brown with is wife and daughter. SOURCE: The Inquisitr

As per Atlanta magazine, Brown is engaged to restaurant designer, Elizabeth Ingram in 2018.

Check out the interview with Alton Brown: